Yesterday I was part of a 5000 strong crowd in Dublin rallying in solidarity with the Women's March on Washington. 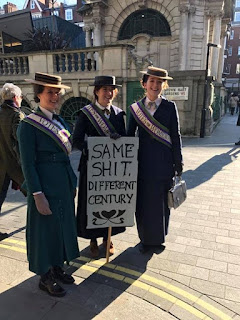 I march because of all who have fought in the past for women's rights.  I march for the present for all who are targeted by hate, racisim, homophobia, sexism, xenophobia, misogyny....  I march for the future, for a world where someone like Donald Trump has become the President of one of the most powerful nations in the world.  Where a man whose actions in business demonstrate him to be a liar, and a cheating dishonest person.  Where a man whose actions to, and words about women, demonstrate him to be a sexist misogynist man with no respect for women...and it makes me fearful for women's rights in the future.  Where a man who is filled with such hate for his humankind that he talks about building walls to keep people out and targeting individual groups of people because of actions of a few.

What will you do?

For more inspirational quotes from MLK I urge you to read here: http://www.great-quotes.com/quotes/author/Martin+Luther/King