On Tuesday evening the hall for roller derby was not available so instead I met up with some of the derby girls.  The plan was that some of the more experienced team members would show us "fresh meat" how to change wheels and clean bearings etc - I love all that kind of diy stuff.  And that we would create a banner for front of our group for Pride Parade 2016. 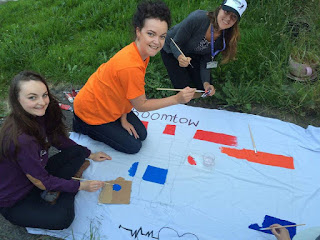 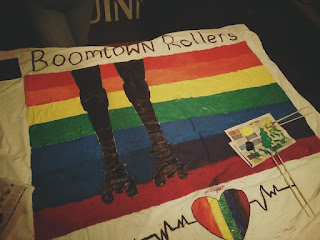 The finished piece.  I think it looks phenomenal - the rainbow flag for Pride, the skater for Boomtown Rollers, and the pulse line and heart for Orlando.
*************************************************
We met yesterday at Parnell Square for the parade.  We were number 98 out of 101 groups/floats/marchers, but actually we ended up going last out of the whole parade.  Bear in mind we were on skates so this was for the best!!!!  There were some pretty hairy moments - in particular the hill from Parnell Square down on to O'Connell Street (eek!) and then near Pearse Street train station the road/surface was very bad for us skaters. A flavour of our day out at Pride! 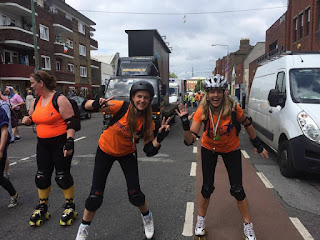 I love this picture of Enid and I :-) 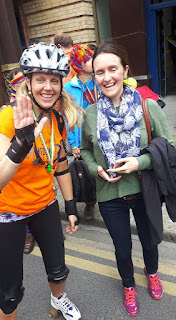 Cousin Kasey was spectating and joined in when she saw us.  I was joking saying that Enid looked like a traffic or roller skate cop :-)
After the parade Enid, Kasey and I went in and checked out Pride Village in Merrion Square (and all the events therein) - nice vibe.  We then went for something to eat in Xico's on Baggot Street (which was the old Baggot Lounge).  I got chilli which was GoooOOOOD!!!!