One week after the referendum result and I can finally breathe.  We made history.  And not only did we make history, but we made it by a landslide.  We had an incredibly high turnout for a referendum and then of course the result - 66.4% of the electorate said yes.  66.4%!!!  That's a ratio of 2 to 1.

For those of you who follow my blog you will know this was something I was passionate about for a long time.  I truly believe this was a bad and dangerous law for women.  Women were put at risk, women were left in pain and agony, and worst of all women actually died because of this law.

Closer to home I have two friends who have been through cancer treatment recently.  Both told me about how before each of their multiple chemotherapy and radiation sessions a pregnancy test was carried out.  Had those tests been positive, their lifesaving medical treatment would not have proceeded.

Soon (by the end of the year) we will have abortion in Ireland.  This will mean 9 women every day, who currently travel for abortion  - for varied reasons none of which require my judgement - can receive healthcare in our own country.  It means that the 3 women who order (online) abortion pills daily in Ireland can instead be prescribed and take this medication under the care of their GP.

Do I believe abortion rates will go up in Ireland?  No. I don't.  Irish women don't need a law to protect Irish babies.  Because do you know who are great protectors of Irish babies - Irish women!

Good God I digress.  Amy we've won! It's over.  You don't need to go over it all again.

But I didn't know. Or didn't dare to believe.  The anxiety and stress blinded and worried me.  I agonised  that maybe we were in an echo chamber in Dublin and it would be lost outside of the capital?.  I formally apologise now for ever doubting the rural vote!  It passed in every single county of Ireland bar one, and even that one (Donegal) was so so so close to passing.

So what does this tell us?  From my perspective I woke up to an Ireland that felt kinder, compassionate and more equal than it is has ever felt before. We have grown up as a country and are now not hiding behind "there are no abortions in Ireland" and will no longer export our medical responsibilities and will care and support for our own.

And I can now stop randomly crying on my bicycle ride home when I think of how Ireland failed Savita Halpannavar.  6 years ago I marched on the Dail to say Never Again, and last week we made that a reality. 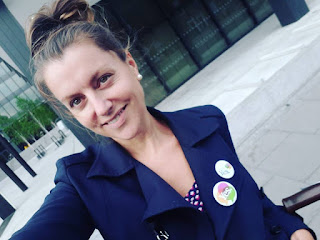 For posterity...here is yours truly after just casting my vote

Email ThisBlogThis!Share to TwitterShare to FacebookShare to Pinterest
Labels: 8th referendum, referendum, repeal, repeal the 8th, repealed the 8th, together for yes