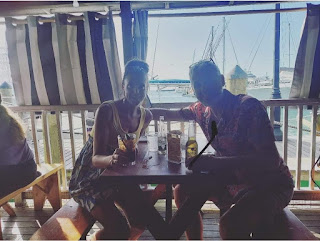 Saturday evening! Patrick came downtown and met me for a little bite and drinks in Happy Hour in Half Shell Raw Bar. Half Shell, of course being one of our favourites, an old reliable.
The colouring of this photo is so funny but I still think it is adorable!
This little island is Paradise.

From there, I met up with Katrina and Garrett who were out and about, pottering.  We ventured down to Smokin' Tuna but could not get in as they were having a private event.  Unperturbed we said we would continue down the back lane and go to Hank's instead.  Well lo and behold, didn't we find out that Smokin' Tuna's back bar abuts the laneway and you can literally sit at the back bar (outside in the lane), have drinks and see the stage. Isabelle also joined us, fun!

And who was on the stage?!!! Oh, only the fabulous Peter Mayer! Probably best known for playing in Jimmy Buffet's band...but for me I don't get a huge Jimmy B vibe from him.  Instead I get George Harrison, Van Morrison, The Beatles (mainly George!), The Tremeloes, Manfred Mann and more of that kind of good stuff. He is awesome! I saw him play in the Key West Theatre Christmas just before Covid and I was enthralled and hooked.  Can't believe I didn't know he was playing Key West again, can't believe I caught him by pure chance.

This little island really is Paradise.