Okay, so I apologize in advance. You might find this post a bit higgeldy piggeldy and that it jumps all over the place. But overall, I hope it describes the storm somewhat.
With the benefit of hindsight I do think that "we" as an island, or community, underestimated the impacts we would have. To the point that I feel that there should have been mandatory evacuations: for the non residents anyway.
Me, I feel, that I was relatively set up and prepared. But! Anyone I was talking to beforehand seemed to think I was being way too dramatic.
In terms of being prepared the main thing I felt was good was that I said I wanted to put all our storm shutters up and Patrick agreed (he may not have necessarily agreed that they were needed, but the two of us worked as a team and put them up Monday evening).  I also said I wanted to do as many sandbags that we have: and again Patrick acquiesced and indeed he did all the heavy lifting with them.
On the inside of the house I had dams or what I call "science bags". They are like material snakes that apparently swell on contact with water and form a dam. Who knows if they work or not!
The wind and rain started on the afternoon of Tuesday and ultimately went on until about 3/4am Wednesday morning. It was noisy and very blustery but ultimately most of the damage (aside from fallen trees etc) was not from this but instead was from the surge from  the ocean.
Our experience was that about 11pm we were planning on going to bed when we got a text from our neighbour saying the water was on its way. Hard to describe what happened next but here goes. We walked out the front door and looked down our street. Literally at the end of our block the water was surging around the corner and storming up our street. Very quickly, our street was a lake and then a river! The front yard was completely flooded and rising up to the front door.
What to do??! The water was rising and we were reading reports on facebook about houses two streets away that were flooding. It seemed very possible (inevitable?) that our house would be breached. So! The action we took was put everything we valued or wanted to save up high. Closets: everything down low, moved up high. Paperwork/documents moved to a safe spot. Patrick's office, all wires unplugged and stored safely on his desk. New two seater sofa: up on the kitchen counter!!! Literally anything on the floor was lifted up.  Bottom two pics below, show the living room and something similar was done in the bedrooms too.
We were pretty exhausted after doing that. And anxious. The water was still creeping up and up (because high tide was in progress). So we are watching and waiting. Stressed and exhausted. Then around 2/3am I just said to Patrick: "let's call it, let's go to bed, we've done all we can, what happens happens".
The next morning we both woke early and gingerly put feet on floor praying it would not be wet.  And it wasn't. We looked outside and we could see a tide line around the house. Our house was millimeters from flooding!!! We were very lucky.
Below are some photos which tell the story more. In particular please have a read of the text of a post I put on facebook. I know other people were not so lucky and I feel for them 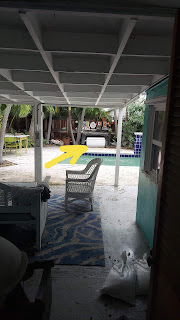 Bit of light relief: when  going to bed I looked out our dark (and water filled) back yard and this cooler was ghoulishly floating around of it's own accord, ghostly luminous white. Ha!
I remember feeling just too tired to even really care or point it out to Patrick. But I did think it was funny when I remembered it the next day. Part of my storm prep were these AWESOME lights on Amazon. Cheap as chips and they were great. We lost power intermittently but not for days like other people on the island. 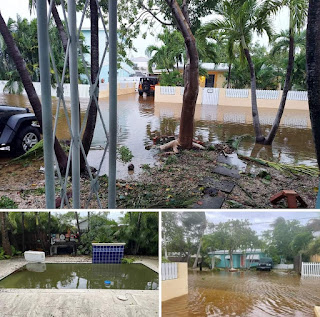 The next morning..
Top pic is the view when you opened our front door
Pic on left is the state of the pool
Third pic is view of our house from our neighbours across the street (the yellow house in top pic)
Facebook post: 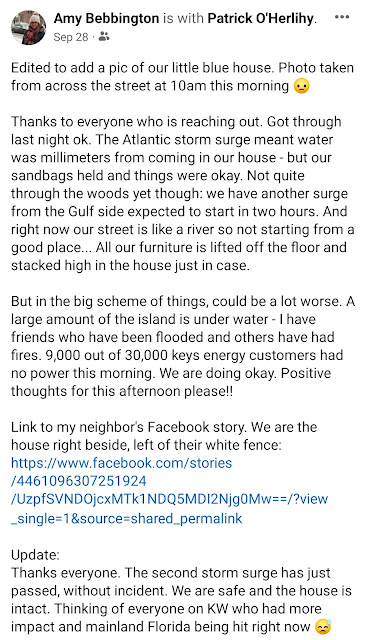 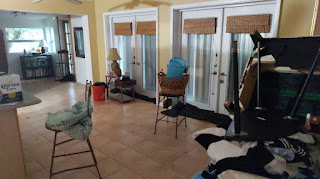 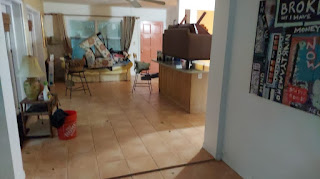 Outcome (for us):
- First of all we had to put the inside of the house back together
- Huge amount of yard work was needed. We had a lot of debris of branches down and palm tree leafs etc. Days and days of work and a massive pile of debris outside the house on the street awaited pick up by the city.
- The shutters and sandbags took a bit of work to take down and store away
- The pool needed a few days of draining, filling, major shocking and chlorination etc to get back to normal. Also! Our pool equipment had got a bit flooded and jammed up so we had a bit of a heart attack, thinking it would be a huge expense to replace. But luckily with a bit of Google and YouTube research we managed to fix it!! Very proud of us 😉
- Big mistake with an outdoor freezer that we didn't think of checking on the next day:  The water had tripped its fuse and all we needed to do was sort that out...had we thought about it. Instead we realized about four days later when we opened the freezer and it smelled like a dead body. We had to throw out a big load of fish bait (it is the fish freezer) and do a massive bio hazard bleach clean-up which as you can imagine was VILE!!
One of our fences got damaged - we managed to fix that ourselves just today. Go team P&A! 👏 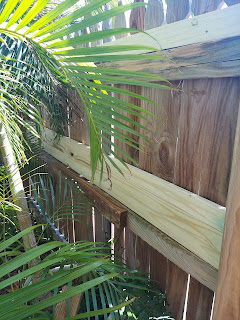