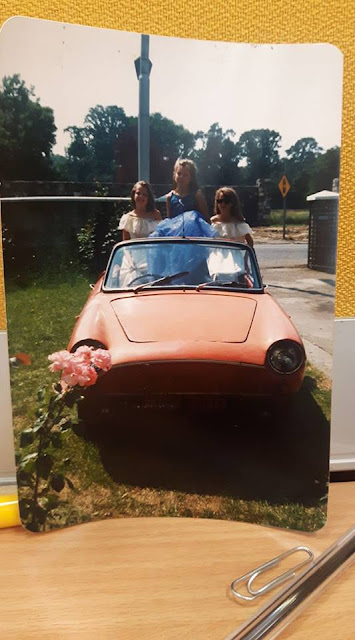 I came across this photo the other day and it made me smile.

Pictured is myself, Enid and our cousin Danielle who is a year older than us.
I remember this photo well - I think Enid and I are about 9...we were coming up with mad hare brained ideas and dressing up and taking photos all summer long.  This photo was taken by Dad but there are tons of photos at home I imagine of us and different friends and cousins in different costumes.

The blue dress was handmade by our Great Aunt - Mary Kelly.  She would have made it when she was about 20 for a dance.  She had a really teeny tiny waist that it fit us when we were 9!!! I remember the weight of it - it was a proper 1950's style dress with a few under layers of netting to it.
Mary was my Nana's sister and we never called her Great Aunt or anything.  We are pretty informal in our family, and in fact she was always known as Mary Kelly - probably to differentiate her from one of my Nana's daughters (my aunt) who was named Mary.  Mary Kelly was such a great woman - she made Enid's wedding cake, and she also made her bouquet which was the most beautiful loosely tied bunch of wild flowers.  She died maybe 10 years ago or so, my Nana and her were very close and I know her passing hit Nana hard and she still misses her so much.

And then the cream dresses were dresses that two of my aunt's Clare & Christine wore when they were bridesmaids for (my aunt and Godmother) Bernie's wedding.  That was the early 80's - 81/82 maybe - but they work as a 1950's style.

If I remember correctly was a Renault Caravelle,  It was one of my dad's many projects, which if I am being truthful to the past must be said did not get any further once my dad bought it.  What can I say, maybe he was busy with other things but my dad was famous for starting things and never finishing them.  Ah sure look it, that's life,  Anyway he had this car for about a year and then sold it on... Nice having this photo of it anyway!