Yesterday was Good Friday in Ireland, and while some businesses close unfortunately the part of the company I am currently working in does not - but however I chose to take the day off.  Which I am glad of. It's feeling like a very nice long weekend already and it's only Saturday. 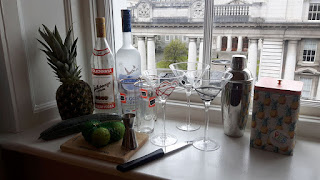 Cousin Kasey, Enid and I met in my flat where I made some cocktails.  The (ridiculous) licencing laws in Ireland outlaws the sale of alcohol, and the Church says one should not drink on Good Friday.  On this basis I go out of my way to make sure I have a drink or two.  I really do not like being told what I can or can't do by the State - particularly when the State is being told that by the Church...  And ironically enough, this year, that ties in nicely with the theme of the play we saw later. 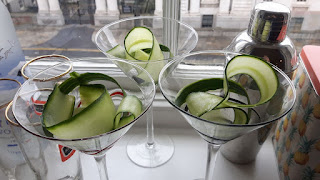 I had intended making a few different cocktails.  But in the end I was too busy chatting and we needed to leave earlier than intended to collect our tickets, so the pineapple dacquiris and ciproskas were scratched, and I just made Falling Waterfalls and vodka and diet cokes.
I've no photo of the food but it was LOVELY - thanks to Cousin Kasey for bringing! 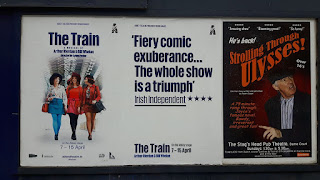 This poster was up outside my office during the week 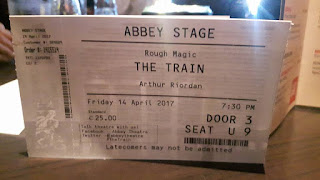 We had another quick drink before the start of the play - theatres are exempt from the licencing laws.  You see! Like it makes no sense at all.  Why is a theatre exempt but a pub is not?  Crazy.
And I ordered our interval drinks.  Ok enough about alcohol on Good Friday, on to the play!!! 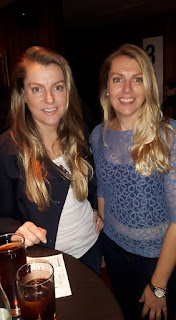 But first, a pic of Enid and I (posterity! posterity!)

The Train
It was wonderful! Absolutely wonderful.  Such an imaginative and creative way of telling the story of the contraceptive train, plus the Ireland as it was then - how much the church was involved in the "bedroom" of Irish families.

The actors were excellent - and great singers - it is a musical afterall.  All in all a great production.

AND at the very end a superb hat tip to #WakingTheFeminists (do you remember my blog post about the event I attended) and a call to action for more areas of women's lib where change is needed.  To be honest it did depress me that while there have been improvements of course (contraception, divorce, signing for loans without a man [bloody hell], removal of obligatory redundancy on marriage, equal pay) there are still remaining other areas where there is MASSIVE improvement needed - bodily autonomy for women being key of course.... #Repealthe8th.  While two years ago Enid and I did a lot of canvassing for Marriage Equality,  Enid had told me that she didn't think she could do it for a referendum for Repeal the 8th. That considering some of the stuff we encountered on the doorsteps (while mostly good, when it was bad, it was HORRIFIC), that she just thought it would be too emotive.  Anyway after last night she thinks she will do it.  I am happy about that - she was really good at it - but I want her to only do it if she wants to do it herself.