Today (Saturday) was an exciting day as I as I picked up my new bike.  Actually, let's first start with Friday and by saying what a SUPER night it was with the best company ever. 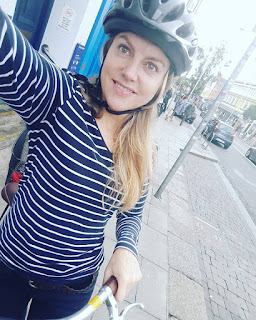 This is me 5 seconds after leaving the bike shop, so excited with my new bike and new helmet that I just had to take a selfie. 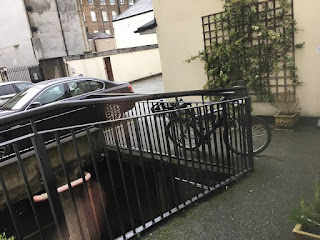 For posterity here is a photo of my old bike.
It's 7 years old at this point and I think has had a good innings.  And it's even getting a second life!  I saw an ad on my work intranet where a lady was looking for a cheap run around for cycling around town - just like me really.  I messaged her last week and she came and had a look.  She LOVED it - even the crate on the back which I said she could remove if she didn't think she would use it..but she said she would - like me for her weekly shopping.  So I couldn't ask her for money for it of course, sure it owes me nothing at this stage, and I like the idea of it being used some some more, so she is going to throw a little donation into our staff charity fund.  So it's a win for us all! 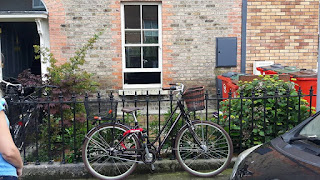 And here is my new bike!
What a beauty eh?!!!!!  I am delighted with it.  I took it around town for a spin this morning and then cycled over to Enid.  I got a good feel for it and decided I'd bring it back to the shop to get the saddle raised a little.  I did that this afternoon and it's an even more comfortable ride now.  It's a good compromise between the Dutch bike which Enid really wanted me to get, and the lighter Brownie that I originally wanted - i.e. it feels like a Dutchie but is nowhere near as heavy.
I was so excited that I went on periscope on the way over to Enid telling the whole world about it.  Enid's friend Alan in Pennsylvania saw my broadcast and messaged her to say Amy's on the way over to you on her new bike.  Enid and I thought that was pretty funny :-) 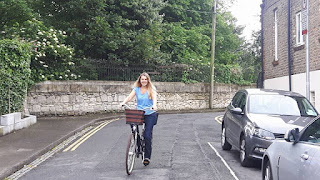 Enid taking it for a test cycle :-) I stayed for about 45 minutes or so with Enid and Ciaran chatting and drinking coffee.  It was nice catching up with Ciaran as I haven't seen him for a while, and hearing what he is up to.  That is one of his latest paintings in the background - he is doing a lot of work lately as he is preparing for his second solo (Pigsy) exhibition later this year.