A little catch all post of what's been happening in my life over the last few days! 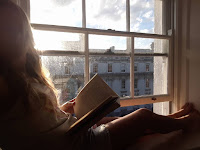 The weather has been mixed...more on that later.  But when it has been nice it has been very nice - in fact quite warm.  My apartment gets very warm when the sun shines - it's an old building but has been very well insulated and living on the third floor helps with the heat also.  So a few evenings last week I sat in my window sill with the window open, reading and looking out on all that was going on below on Merrion Street.  Best spot in the house! 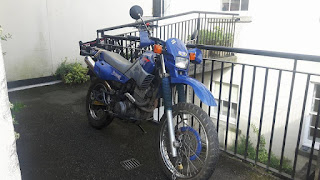 My Dad kindly called over at 8am on Tuesday morning.  This was a BIG help for me.  I was getting my internet connection upgraded and tv channels installed  (Vodafone tv), and Vodafone very helpfully could only tell me they would be calling some time between 9 and 5.  How crazy is that! I would have had to take the whole day off just to wait around for the engineer. If they even said "morning" or "evening" that would have done.  Anyway, thankfully Dad didn't mind, although his face was a little surprised when I told him I didn't know what time they would be coming at and it could be any time during the day...oops I may have left that little detail out when I first asked him to do it. Sorry Dad!  But he didn't mind too much, he had nothing on, plus I had bought lots of nice stuff for him to eat :-)

He came on a motorbike rather than car, as parking around my place can be difficult to find.  I had suggested the train to him! This bike I have not seen before... Hmm.  I'll be honest it would not be my cup of tea.  And I wouldn't have thought it was Dad's either but sure there you go.  He is normally more into older/vintage style bikes.  Actually I blogged previously about his very first motorbike which he still has now...well kind of...read the full story here. Please do excuse my writing in that post, it's from a while back and I cringed when I read it today.  But it's still a good story so I am glad I recorded it, bad prose or not! 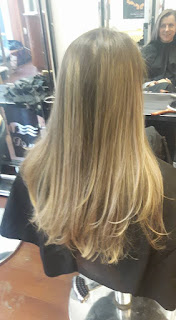 Hair cut!  Long overdue!
After my recent week with Lydia in Oman, my hair was really dry from the desert air.  I eventually got the time to go to the hairdressers last week.  Lau went mad with the scissors as he usually does, and I had to calm him down and stop him from taking off too much as I usually do.  Anyway the end result is fine.  The back is lovely and long but the front is probably shorter than I wanted, but it was probably needed, and anyway my hair grows very fast so no worries. It's fine!  And it IS in much better condition. So I really should not complain! 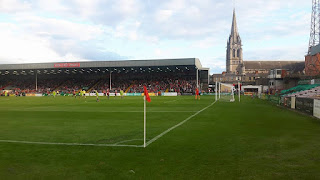 On Friday I met up with a friend and we went to see Bohs v Drogheda United. Oh but first a drink in Lemon and Duke, and burgers in Bunsen on South Anne Street.  I had a craving all day for a hamburger. And the burgers in Bunsen are always ALWAYS just perfect. They've recently opened up a new branch in Ranelagh and Enid said they are good there too.

After the match (which I really enjoyed! Shock horror!!) we strolled back into town. From Dalymount to O'Connell Street it is about 20 minutes, and then we continued over the river to Southside and up to South William Street.  Eek detouring through Temple Bar first which was horrendous! It was a very quick detour.
We had a few drinks in the South William and it was lovely.  It was a great night all round. 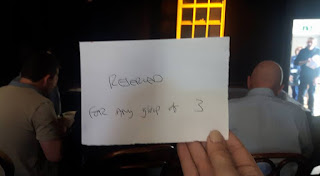 On Saturday Mam, Enid and I went to see a play in the Powerscourt Theatre.  It was a Bewleys Café theatre production which would have been held in Bewleys Café on Grafton Street but since that is now closed (but due to open again soon I believe) they have decamped to Powerscourt.  They have a relaxed way of booking tickets!  You ring or text a mobile number and then someone rings you back and confirms etc, and then you arrive and there's a piece of paper scrawled with your reservation. on your table.  I LOVE IT!!! 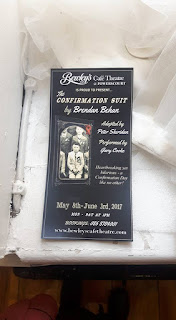 The play was fantastic.  The Confirmation Suit by Brendan Behan, adapted by Peter Sheridan, and starring Gary Cooke (from Apres Match) - a one man show.  Gary was phenomenal, an amazing physical actor and held us spellbound for the hour.  I don't think I've seen my mother laugh so much, she said she nearly cried at one point she was laughing so much.  But it had everything, a lovely piece of poignancy as well as the comedy.  And such stories within one main story.  I am so glad we went - my mam is great at suggesting things like this to me, and for that I am grateful. 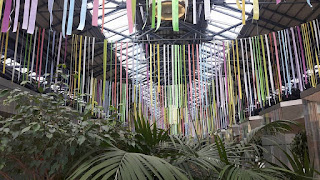 Mam headed on - she went to visit Nana in hospital.  Enid and I pottered around town and then she left to go out with Ciaran and I continued pottering around.  I wanted to go see a Cuban art exhibition but when I got there it was over.  I am so mad with myself.  Completely my own fault for not going when it opened so this is what I get! Lesson learned :-(

The photo above is from the Chq building which still has its Easter decorations up!!!
They are pretty so I will forgive them. 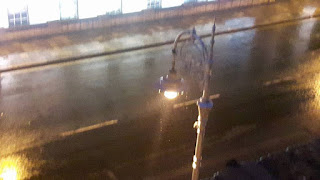 I did say the weather was mixed didn't I!  View from my window Saturday night... 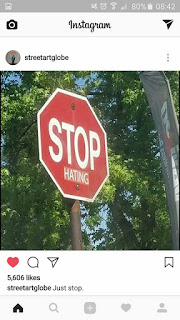 I've no words.  I wrote a bit about it over on my facebook page.  I simply can't iterate it any more.  It's depressing sometimes the world we live in. I am thinking of the friends and families of the deceased (and in Manchester too, and in other countries affected by terrorism).  It's all I can do??

And then last night I met up with a friend for drinks. It was the bank holiday, something always nice being out on a Sunday night. But it was nothing too crazy. I'm old :-(  It was just nice catching up and chatting.

In addition to all of the above there is a story about getting tickets to see Bernie Sanders speak in the Bord Gais theatre but I shall save that for another day.  Long story short though is that Enid and Ciaran took the tickets and went to see him.  Actually, you can read all about it over here on Enid's blog if you like!