Day 3 we woke to lovely sunny weather which continued to get brighter and warmer as the day went on.  It was Friday (a normal working day) which deserves a mention.  There is always something nice about doing fun things on holidays on a day that you would normally be in work.  It always feels a bit mischievous or something to me - like you are mitching from school :-)  Not that I ever mitched from school in my life!!

So first up it was breakfast!  By now I think you are seeing a trend around food yes?!  Bert assures me that he never usually eats like this.  I have to say God bless him for being so magnanimous and putting himself through all that food just for the sake of sharing the joy of Southern cuisine with poor ol' Irish me ;-) Fair play Bert! :-)

We drove to Reynoldstown where we ate in the fabulous "Home Grown".  I really liked this place!  I'm not sure how to describe the décor.  I guess you'd describe it as homely?  And as for the food!! I can taste that chicken now just thinking about it.   I had the Comfy Chicken Biscuit which was the most succulent southern fried chicken with biscuits and sausage gravy. Oh my gosh.  Heaven! Sigh, I do wish I could get this in Ireland. 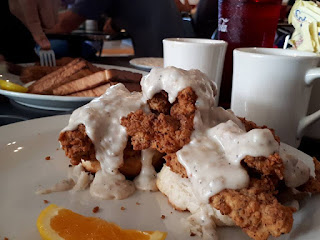 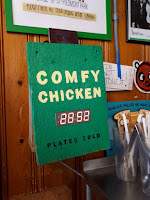 A quirky little number counter of how many Comfy Chickens had been sold - as I had just had the chicken I was entitled to hit the green pad and move the counter up +1 :-)
﻿
We left Reynoldstown and just a short drive away we arrived  at Cabbagetown / Grant Park where the Historic Oakland Cemetery is located. This is a Victorian Cemetery and Civil War Fort and Bert showed me around drawing my attention to some interesting parts of it. Eg. the memorial for the unknown Confederate dead, the Jewish section of the cemetery, the Irish section, and the Potter's Field for the citizen's of Atlanta who are resting in unknown graves. The final stop in the cemetery was at Margaret Mitchell Marsh's gravesite which was very interesting for me. 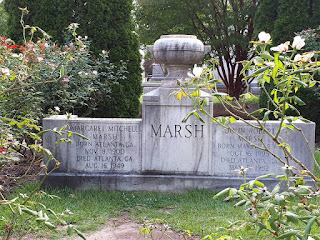 
A lovely surprise!
From there we drove to Midtown. I think in my head we were going to park in the CNN building carpark and head into Midtown.  Instead we pulled up at the Center For Puppetry Arts where we met Conservator Russ Vick who is a friend of Bert's from his hometown.
Russ took us around the whole centre/museum and he really added to the experience.  Hey how often do you get a personal tour from someone who has his name on a whole Labyrinth exhibition!! 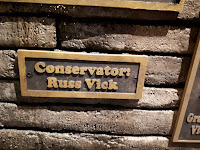 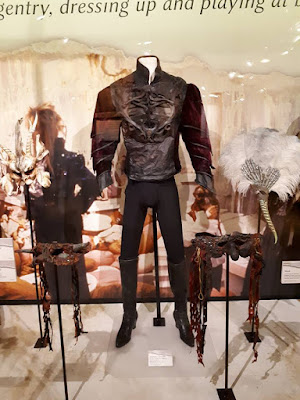 This is the costume worn by David Bowie - it's to scale, that was his exact physique!

I wish I took a photo of this: he told us great details about some of the puppetry in the film and how people/puppeteers were actually inside some of the puppets from a battle scene - creating the illusion of a smaller puppet riding on a horse type bird.  Ok I am not sure I have described that accurately or if it makes any sense at all! I will have to see if I can get a photo on the internet which shows what I am talking about!

He also took us through the Jim Henson/Sesame Street/The Muppets expo and again added so much additional detail from his own personal experience of preserving and restoring some of the pieces. 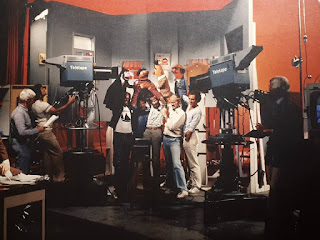 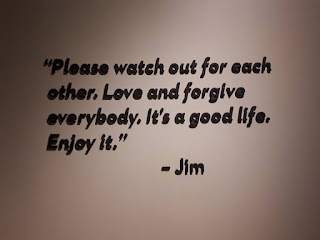 It really IS a good life.
Delight in the present and all that - something I am trying to focus on these days...

And then! We got a tour of his workshop and he showed us what he was working on - a very intricate piece. And this is where the science happens: he was working on trying to rehydrate 20 year old latex to be replaced back on to a puppet hand.  How many people can say they have seen that?!  Thank you so much to Russ! I really really enjoyed our tour. 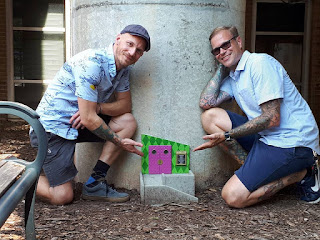 We also spotted another Tiny Door Atl!  It's a replica of the Centre for Puppetry Arts.  How adorable is this!  Above is Russ on the left, and Bert on the right.

It was time for lunch. Yup more food!  Sure look it was a holiday wasn't it! 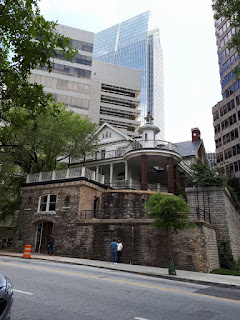 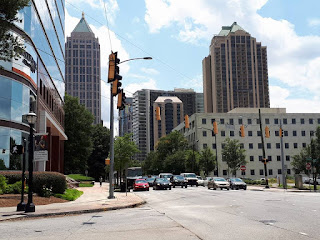 Russ, Bert and I strolled through midtown and had lunch in a pub/restaurant called The Nook. I had more tater tots :-) These ones were covered in pulled pork, smothered in a Coca-Cola bbq sauce! 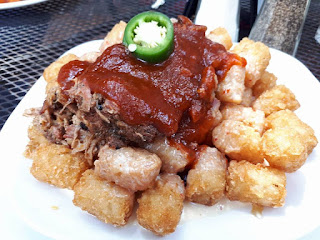 C'mon! How great does that sound and these look!  Bert had a peanut butter hotdog with bacon on top.  Yes you read that right.  Peanut butter! He did say however, it was disappointing that it didn't taste as peanut buttery as he was expecting :-)

After lunch the tour continued. We were considering going to the Aquarium but when given an alternative option of going to the river, that is what I chose. 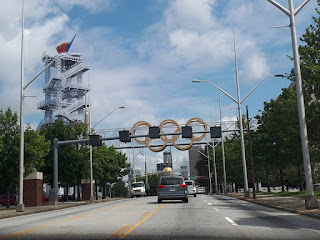 Passing the Olympic rings and the Olympic flame (how cool is that!) we first drove to and through Buckhead where we saw the Governor's Mansion. It was exactly what I imagined a big old Southern house to look like.  It was very nice indeed!

We drove onwards to Vinings where we parked up and set off on the Chattahoochee River trail.  The river was beautiful! And there were some nice places where we stopped and admired the view.  And nice viewing spots where we sat down on the rocks and relaxed while contemplating life.  Well  that's what I was doing in my head anyway! :-) 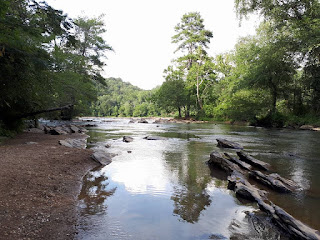 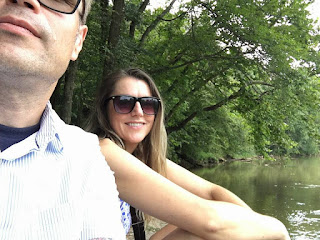 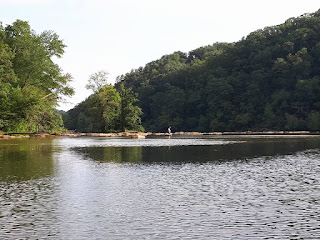 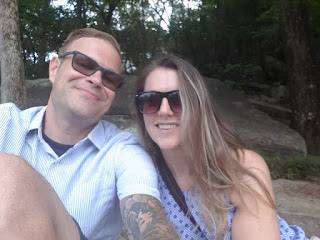 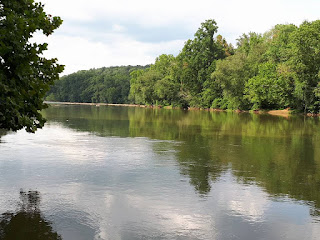 The Chattahoochee was really stunning as you can see from these photos.
﻿
We scooted back to Bert's and after a quick shower and change of clothes we headed out on the town :-) 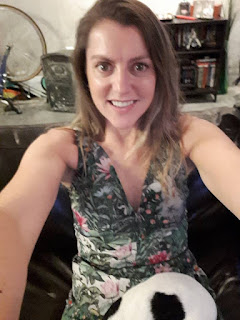 This is me before we headed out.  I do love this green maxi dress.
I was trying to take a selfie with one of Bert's dogs Millie but it didn't really work out lol.  I must remember to tell you about Bert's dogs - maybe I'll do a 6th kind of a wrap up blog post at the end after the Day 5 post and tell you about the (cute and funny!) dogs in that...﻿

We took an Uber to West Midtown where we ate dinner in JCT Kitchen.  Where the food was sooooooo divine. 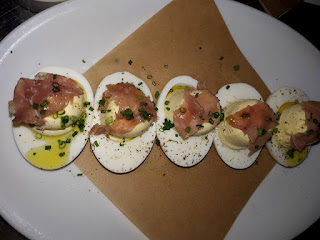 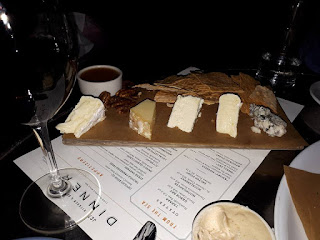 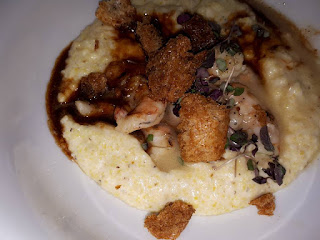 To start we shared Deviled Eggs and a Sweet Grass Dairy Cheese Plate (two of the cheeses were from Bert's home town!). And then I had the Shrimp and Grits and Bert had Fried Chicken. We also got Fried Corn and a dessert of Banana Pudding.  Lord! Those shrimp and grits were amazing.  The grits were rich, creamy, and opulent.  Hmmm.  I am thinking about them right now.  Good God they were incredible!

We finished the night off by going to Decatur, GA.  "Decatur" which I now know how to pronounce correctly.  My silly Irish tongue was making a right old mess of it before, but sure now I sound just like a local. Well.....maybe not :-)
We had some amazing cocktails in Kimball House.  Look this place up!  It's seriously unreal:  http://www.kimball-house.com/press/

And then the rain.  It came down suddenly and stormed hard. Whoa it was so heavy.  And lightning too. I was interested to see it (we do NOT get that type of rain in Ireland) but I was glad we were going home and that it did not rain once during the day during my time over there.