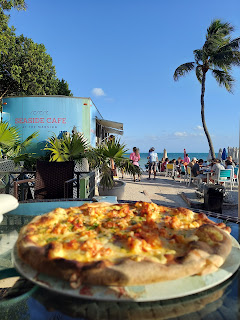 By a series(?) misfortunes, well one or two anyway, we ended up finding a new food place to add to our Favourites List.
While we initially planned on having dinner in the new Shanna Key (Sally O'Brien's!!!!!*), upon arrival at the pub we found it closed as it is still under renovation.  So, we cycled on to Salute on the beach and found it to be absolutely JAMMERS. So, considering the route we were on, I suggested to Patrick that we go to the Southernmost Mansion where we had never been and try one of their famous Lobster Pizzas.  We got a sit on a raised platform, under an awning with a beautiful view of the ocean - much better than in this photo.  And the pizza was divine! Thin and crispy and generous on the lobster. 10/10! A lovely place to switch off and relax.  We will be back.
Side note: new name for Shanna Key....Sally O'Brien's.  Where is my throwing up emoji.  As an Irish person I think it is overworked and twee.  Why any earth could they just not call it O'Brien's like they would in Ireland???  And of course, that name just makes me think of the Harp Ad in the 1980's, okay well that is kind of funny I suppose.  The pub was bought by a guy who has two Irish pubs in NYC already, so I had high hopes for this place....let's see how things go from here!  We did peer in the window while there and did see a lovely new wooden floor so that is nice I suppose!  Watch this space!
Sally O'Brien and the way she might look at you
Posted by AmyDublinia at 18:07