Last night we went out to eat with friends in That's Amore in Malahide.
That's Amore is a small "no frills" family friendly kind of restaurant which suited us down to the ground to have a quick bite with friends and catch up with them since we last saw them.
I was very impressed with the food I must say! 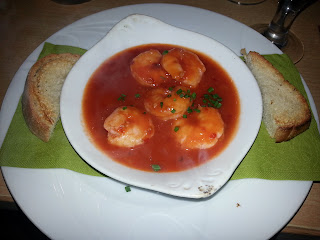 To start I had prawns in garlic & tomato sauce.  The sauce was incredible.  I dipped the bread in it but there was still a lot left over and I was almost tempted to ask for a spoon to drink it!!﻿ 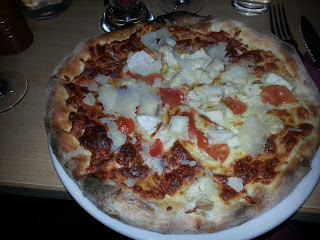 A good stonebaked pizza with toppings of cherry tomatoes and parmesan cheese.
I do love parmesan cheese!
The only criticism of the pizza/topping was it was a little dry.  I think more sauce would have improved it a lot.  The pizza bread however was very nice - good flavour and texture.
With the above we had 2 bottles of red wine between four us.
I would have kind of liked to have  dessert after the above - particularly as I found the pizza a little dry.  But it was our friends treat and they were using a voucher for starters, main & wine so I decided not to order anything else - probably for the best anyway - bikini time in June!!!!
We then moved to Gibney's in Malahide for a few more sociables.  We got the dart back into Connolly and our train home - an hour in total - which wasn't the best, but wasn't the worst either.
An enjoyable night all round.
Posted by AmyDublinia at 04:17