It was themed: Big Ideas.
Did it deliver?
In my opinion some of the speakers did, some did not.

At the end of the post I have posted some of my photos from the event and below find a small summary of what I thought of each speaker/their thoughts.

Fiona Newell
Fiona Newell spoke about the beauty of the ordinary and her research into why this is so.  She showed that we value familiarity and averages which is just common sense in my opinion. She also spoke about why boys like blue and girls like pink which excuse the language I thought was complete and utter bullshit.
According to Fiona "every girl loves pink".
She thinks that girls like pink because during the hunter-gatherer period we were gatherers and we differentiated between different shades of red to discern if food was poisonous or not.  Nothing about pink being forced down our little girls throats by advertising (disney princesses et al), nothing about the recent "fashion" phenomenon of mothers dressing their children in little pink tutus...30/40 years ago when I was born there just wasn't this obsession nor this availability of pink - when you look at any childhood photographs from that period (or before) there are sunflower yellows, glorious greens..whole rainbows of colour.  And an odd pink here and there.
She didn't give her explanation on blue at all, she showed a photo of her child with a load of high end cars and motorbikes which "symbolise" red. But nothing about blue..
I was far from overwhelmed by her talk and overall my thoughts are "she kind of stated the obvious", and "this is her job????"

Easkey Britton
An inspirational talk and one which made me think that I would like to surf...
I would however have liked a little more information...
How/Why did she end up in Iran?
Was it difficult arranging?
What did she have to wear while surfing?
She says she wanted to empower women.  What did the women she met in Iran have to overcome to get out out on surf?
Who did she encounter??  Give us specific details.  Twas all very vague "a woman goes out on a surfboard while her husband holds the baby....." "a village united in their ambition to surf....." "a girl happy she is out on a surfboard...."

Constantin Gurdgiev
Constantin talks very fast, so obviously he is very intelligent ;-)
I enjoyed Constantins talk and views around humans as a commodity/capital. While Kasey noted that this was probably an "off the shelf" talk/slideshow for him I will say that I found it good because it was structured.  He talked about what was traditionally valued in the past and what his thoughts were about the future, and what we as humans will value in the future, and what we need to do to get the best out of human capital.
Overall a thought provoking (fast!) talk, of the average standard I would expect from a Ted (or Tedx) talk.

Dave Smith
This guy has big ideas.  In fact as a big as building a 5 storey robot.
The developer of a skateboard/bmx etc festival in Dublin (The Kings of Concrete) and now the "take-overer" of an empty building in Dublin which is used for a variety of uses all for the good of the people and our city (Mabos).
The problem is now that while everyone (city planners included) like/LOVE the concept it is causing difficulties to "categorise" into a box according to legislation.  His talk was all about challenging our notions and our legislation and our planning ideals.
This guys is definitely a Big Ideas kind of guy.  Fair play.
Ps. Only thing I found a small (v small) bit grating was the amount of times he mentioned his 5 storey robot idea.

Fergus McAuliffe
Interesting (and entertaining) little talk.  I liked the information about how freezing affects human cells (the water in them freezes and we die!) whereas in some animals/birds their systems adds small amount of glucose solution to the cells which stops them totally freezing so the cells survive.
An entertaining speaker with a few smart jokes and fun slides thrown in for good measure.

Niamh O'Mahony gave me no information that I did not know before.  "The Future" she spoke about is already here as far as I can see. If she knows something different she didn't tell us about it or show us any demos of it, or pictures of it.
She was apparently wearing a wrist watch type of health sensor - a pic of it up on the screen behind her would have been nice.
And I know we can all forget our lines but hey, she could have made light of it and actually tied it in with what she was talking about - "sorry about that, later on tonight I'll get a report from this (point to wrist) saying my heart rate spiked at this point!"
This may have been her first talk to an audience this size, good luck to her in the future.

Kevin Thornton
I have seen Kevin T on television and I have eaten in his restaurant twice.  I've never found him to be the most effusive of people.  Okay I am going to say it, I thought he was rude.
What a surprise!  A good speaker with nice ideas about respecting the seasons and some great photographs to demonstrate why.  Some funny anecdotes (photo in front of the parents in law lol), some personal insights (his son contracting meningococcal septicaemia), well made points (no flavour strawberries) will make me think more about what I eat in the future.
Cheers Kevin.

Shane O'Mara
Hmmm.
I am not sure about this one.
Prof O'Mara spoke about how to recognise and prepare for a zombie attack.
"Just go with it" said my sister.  So I did.

Cathal Garvey
This guy is cool.  And his ideas and things he shares for free on the internet are even cooler.  Want a "Home Centrifuge" - yeah just download his plans/drawing for one and 3-D print it.  Attach it to a home drill and away you go.
He wants to bring bio-technology into the home and I have no doubt he will.
Whether Kevin Thornton would agree with it is another thing!  It was interesting to think about their differing ideas.
I enjoyed this talk.

Robin Ince
Big ticket speaker I guess.  Bit shouty at the beginning but he calmed down.
Talked about the joy of science and learning more and exploring more.  Talked about Darwin and his quote that the mind "is a chaos of delight".  I liked this - for me felt a bit like one of my favourite mantras "delight in the presence"
Yeah overall his talk was entertaining.  A "big idea" maybe not, but certainly didn't close my mind (like some others!!!!!!)

Lisa Domican
A determined lady (in everything she does) and mother of two children with autism.  She came up with an app (at the beginning of the "app movement" as far as I could see) to aid people with communication special needs.  This app has certainly done wonders for her daughter and I am sure thousands if not millions more people around the world.  I am sure there are tons of these kinds of apps now but she was the first.  Brilliant!

So they were the speakers.  We also saw a demonstration of Quantum Locking or Quantum Levitation and that was cool!!!!!!!!!

All in all a "good " afternoon in Dublin.
To the organisers of Tedx: "could do better" 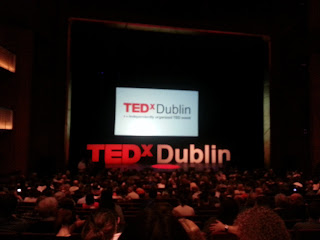 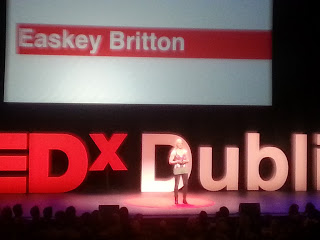 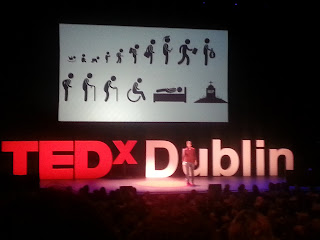 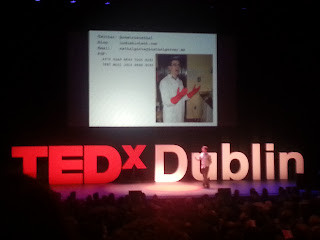 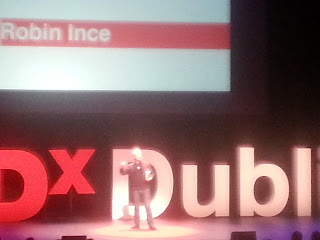 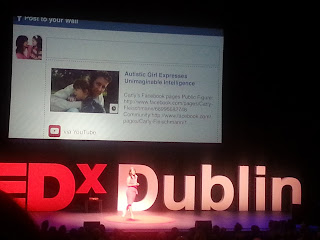 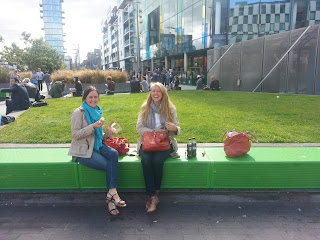 Enid & Kasey having a spot of lunch outside the venue on one of the many seating spots. 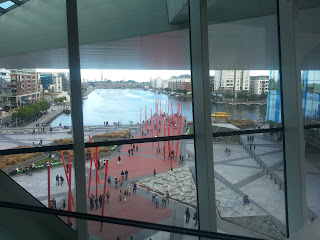 How fantastic is the view from the top floor of the theatre!  Dublin you are looking good!