Earlier this year my friend Tara suggested we go somewhere to celebrate her birthday. Of course I was interested and when Ibiza was mentioned I decided I would definitely go.  It is somewhere I had never been before and I had heard great things about it.

Tara came over to me on Wednesday night to stay the night, before our flight out the next morning.  It made sense for her as it saved her husband getting up to drive to the airport (our flight was EARLY) and it made sense for both of us as the holiday felt like it started that night.  We were both excited and had to force ourselves to stop chatting and laughing in bed and go to sleep before our 3am wakeup call. 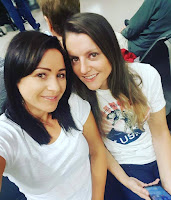 ﻿
I must say, as horrific as 3am sounds I really didn't feel too bad at all.  Maybe that was the calypso coffees I made with breakfast - whaaaddd, sure look weren't we on our holliers.

Things were smooth in Dublin airport, and we were off and landed before we knew it.  Although! There was a group behind us on the plane who were intent on starting the Ibiza party early but hey, look what can you do.  The poor crew, but they must be used to it because they were well able to handle them.

Ibiza is a small little island with a cute little airport which reminded me of the Key West airport.  It was quite busy though - flights coming in literally every 10 minutes from all over the world.  It was quite surreal actually - on Friday night we were at a Tinie Timpah show directly under the flightpath - and the planes fly very low - so all throughout the night we had planes coming directly over us.  It was the same on the beach during the day.

Tara and I made our way to our hotel where we checked in - we got a nice room on the ground floor with the most amazing view of the ocean directly at our eye level. 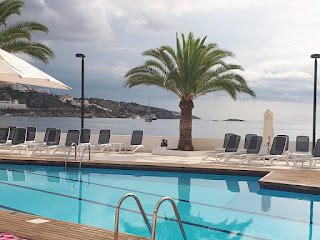 ﻿
The view from the higher floors would probably be different, maybe even more impressive, but I liked the way my sight was drawn all the way out to where the sea ended and the sky started.

Then! Then the rain started.  So we decided we would head for lunch and prayed it would clear up for the afternoon. 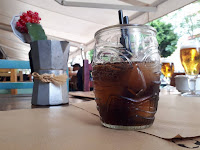 ﻿
We ended up having a long leisurely lunch (due to the rain) with a few drinks - sure what else could we do.  The rain got torrential/monsoon-like, with thunder and lightening, but it did eventually clear up.  And we made it to the beach for whole afternoon.  And it was glorious.  Because we don't get much sun in Ireland I really treasure any time I can get at a beach in the sun and I immediately switched off and relaxed.

After the beach Tara and I headed for a drink in a tiki bar close by.  It's a bit of a tradition of Tara and I - last holiday we were together was in St Augustine, Florida and I used to go out on a boogie board all day, then throw a pair of board shorts on with my bikini top and go across the road to a dodgy old biker bar and meet Tara and friends for drinks.  So we had a big laugh together saying it is just not a holiday unless we are in a bar in bikinis with damp clothes and hair. 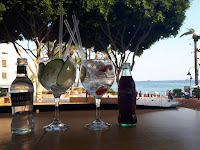 ﻿
I do love a tiki bar - I always feel like I am on holidays with Tom Cruise and Elizabeth Shue :-)

So that evening, after quick showers etc, we went out to the Port/Marina in lovely old town Ibiza. 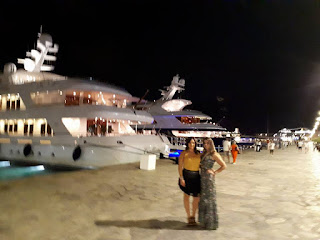 ﻿
The massive yachts were a massive juxtaposition to the old walls and forts of Ibiza. 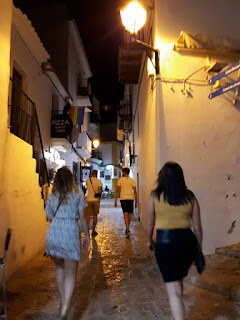 ﻿
We strolled around the lovely little cobbled narrow streets and settled on somewhere to eat where I got swordfish which was fab. The girls got paella between them which was so huge it would have done for the three of us.  That paella was utterly amazing. 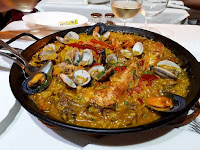 I may never eat paella again unless I am in Spain/Ibiza because it simply cannot live up to this. ﻿
We spent the remainder of the evening in a lovely tavern up on the rooftop of an old fort.  It was full of locals (about our age) all casual but smartly (and stylishly!) dressed enjoying after work Thursday drinks. 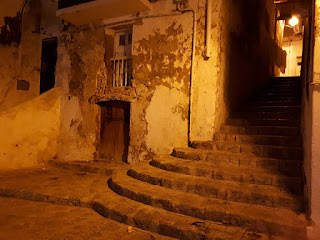 Steps up to the roof﻿

Friday was another beach day!  A different one from the previous day - a little bigger and more atmosphere.  More beautiful views of mountains and sea - Ibiza really is a beautiful island. 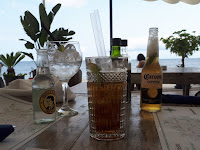 ﻿
After a long day at the beach we went for something to eat and a quick drink on the way to the hotel and then we got ready for the night out! 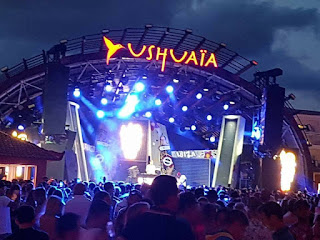 ﻿
Jackie had booked tickets for us to go see Tinie Tempah in Ushauiai which is an outdoor club - and which was very cool, and atmospheric.  I wouldn't have thought I was going to love it so much.  Tinie Tempah was great but it was all the DJ's before which I really loved.   Again not something I would have thought was for me but I really did have a great time.

Afterwards we headed across the road to Space (one of the big Ibiza superclubs) - it's recently been renamed Hi but everyone still calls it Space.  I really liked this too! And again not something I would have thought I would (lol you're probably wondering why I went to Ibiza at all!).  There was one main room - glitterbox - with a cool dj playing some cool tunes with the crowd pumped and dancing.  And then there were loads of different rooms off of it where there were different things going on - a chilled garden area, techno house music room, 90's dance area, acrobat/dancers/performers etc. It was great!

﻿
The only bad thing was that we all had worn high shoes/wedges out which was a biiiig mistake (but hey they made the outfit lol!). My feet were killing me and I finished the night and went home earlier than I would have wanted.  Seriously! Always always wear flats in Ibiza! 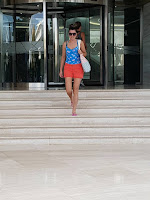 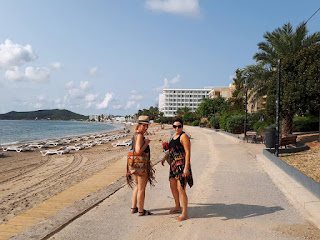 ﻿
So guess where we went next morning? Yep. The beach.

We were kind of debating what to do that evening when some guy selling tickets for an event came past and started talking to us (there are club promoters etc selling on the beach constantly).  We ended up buying tickets for The Zoo Project which sounded soooo cool and as it turned out WAS soooo cool. We finished up on the beach around 3pm and went back to the hotel to get ready (a very quick turnaround) and headed to a bar for an open bar, and body painting, which was included in the ticket price. 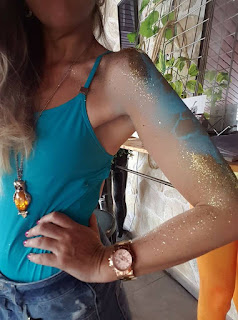 Yep the body paint on my arm and face kind of made my night :-) 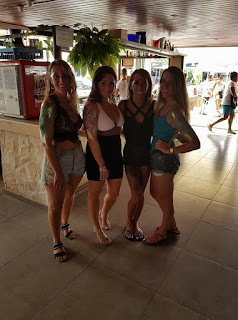 At 5pm our coach arrived and we travelled about 30 minutes to Zoo - an old abandoned zoo turned into a festival space.  I had a ball! Loads and loads of bars - in old animal cages, lovely food vendors (I had the most amazing tacos), acrobats, performers, yoga (in the old pony ride enclosure lol), a dj/show in the seal pit with the crowd all standing and dancing in the viewing stands.  It all finished at around 12 midnight - we had originally intended going on to a club but we were all pretty wrecked after a great night so we just headed back to the hotel.  And considering our long day the next day I was very glad of that! 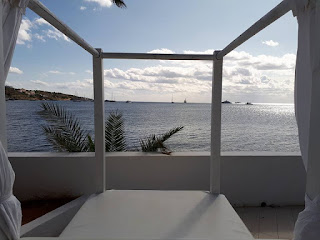 ﻿
For our last day I packed my bag pretty quick and headed to the pool to get a last bit of sunshine (I'm Irish, I need as much Vitamin D as I can get!) before heading to the airport.  Ah the airport...where it all went wrong!  Our flight kept being delayed/pushed back and back until we knew there was no way we were making our connecting flight in Madrid.  We got to Madrid, queued up with a million others and eventually got ourselves sorted and switched to an Aer Lingus flight leaving at 10.50pm that night (groan).  Could have been worse though!  Anyone heading to London couldn't get on a flight until the next morning which would have been an absolute pain. Anyway we eventually arrived home in to Dublin airport at about 1am (compared to our original 7pm eta).  Strangely enough I was absolutely fine - I think the combination of the early previous night and then sleeping on both flights really saved me.
Posted by AmyDublinia at 12:10