I have been intending to do a detailed post about my feelings about the 8th Amendment in the Irish constitution and why I believe it needs to be repealed - that is for another day as it is a complex issue about women's healthcare and rights (which extends so much further than just abortion rights) which deserves some time and attention to explain my thoughts fully.

In the meantime I would like to record details of a protest I shall attend tomorrow at Dail Eireann.  The plan is to dress in the costume of Margaret Attwood's handmaids and the objective is to call attention to the Oireachtas Committee (on the 8th amendment) as they start their deliberations  - that after the clear pro-choice recommendations of the recent Citizen's Assembly we will not accept any retreat.

The Oireachtas Committee is made up of 21 politicians and it is in their hands to decide what legislation we will get/get to vote on.  Our objective is to put them under pressure that they cannot but recommend pro-choice legislation - again along the lines of the Citizens Assembly.

It took me just under two hours to make my handmaid's cape and hat this evening. If Enid wasn't away I would have zipped through it on her machine but unfortunately I had to do it all by hand sewing. 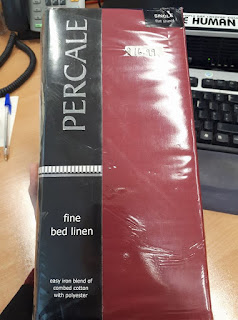 I was only able to buy a sheet in the correct colour in a Single bed size.  I was worried it would not be big enough but actually there was so much material to battle with that I was glad I had not got the double. 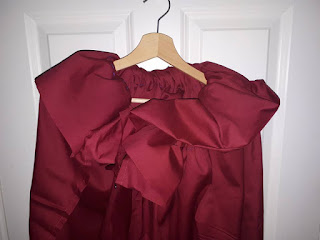 I created it with a simple long/high collar which came out really good I think.  Plus I think I will get away without a hood because of this collar - which is a relief because I simply don't think I have the energy or will to make a hood as well. 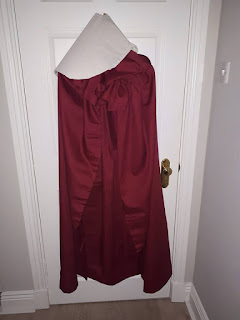 Finished! Cloak (or cape) and hat.