My mother is awesome!
Friday she was over with Enid going through her wardrobe and this morning at 9am she came over to do mine.  I am trying to think of the word to describe her skills at wardrobe organising :-) It will come to me...but in the meantime take it from me she's got a real talent for it! 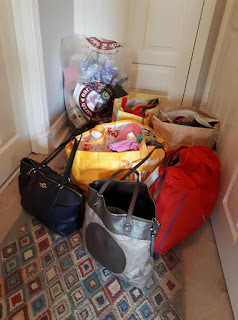 So much so that this was the result. 1 big bag of rubbish for the bin. and 6 other bags of varying size packed full of clothes for donating to the charity shop.  This is on top of me giving away the same amount only about 3/4 months ago after a previous clear out assisted by Mam.
I decided I'd bring the bags straight to the charity shop as otherwise the bags would sit there 'til kingdom come.  Actually funnily enough, later on that evening I saw a cartoon on facebook "saying happy anniversary to the clothes for donating that have been sitting on the chair in the corner of my bedroom for a year now".   Ha!
So to avoid that happening I loaded up my bike - probably looked a bit crazy, I really couldn't care less - and Mam and I walked (while I pushed my bike) from my place over to George's Street.  There are 3 charity shops literally beside each other but thankfully I didn't have to choose one over the others as only the St Vincent De Paul shop was open.
As we walked home for a quick coffee and some nibbles before Mam got her bus home we made a plan that we will do another clear out after Christms focussing on "stuff" (read junk!!!) rather than clothes.  I look forward to that, it will be good to do a declutter.