Easter Sunday is a big deal at home in Ireland.  Well in my family anyway. We have a big dinner similar to Christmas in my parents house with all attending.

Yesterday was no different with my sister Katie travelling from Galway and Enid making her way over from Southside to North on the bus(!!).

It was however very different for me this year!

Pie debacle:
Patrick went off on Sunday morning to do some grocery shopping and came back with No Key Lime Pie. Drama and despair (on my part) ensued.  It turned out that Publix was closed (nice for their employees, bad for someone desperate for Key Lime Pie like me) and the pie in Winn Dixie is never as good as the Publix one.  Faced with No Pie or Second Best Pie a decision was made to take a trip back to Winn Dixie to get some Key Lime Pie.

Side note.  The Publix Key Lime Pie is so special there are internet articles about it

So with the pie ensconced in the fridge and dinner planned for the evening what to do for the day?  Well first I cleaned my house from top to bottom.  Those of you who know me well know I am not the most domesticated person (housework bleugh) but it was way overdue and it felt so good, and still does today, to have it done.  After that I took myself off downtown to meet up with Dawn for a little drink.  Totally unplanned but you know me I find it hard to refuse invitations! Andie and Dawn were in the Green Parrot where Tony, Andie's husband, and his band were playing.  Latin jazz funk, very cool.  The Green Parrot is fast becoming my favourite bar in Key West - cool atmosphere, good drinks, GREAT bands and music, and free popcorn :) It was a fun afternoon with some good craic chat and conversation with the laydeez.

From there Dawn and I went to La Te Da to their "Sunday Tea Dance". It was pretty animated and raucous. It reminded me of Apres Ski in Europe - 4pm in the afternoon and everyone is jumping around and dancing on tables like it's 2am in a nightclub.  Ok so  that's Apre Ski in Chamonix, France,  La Te Da wasn't aaaaaas wild as that.  But for a slow Sunday afternoon on a sleepy Duval Street (at that time of the day) it definitely has the most action going on. 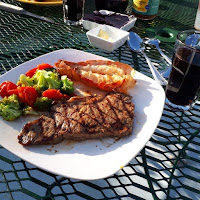 And then that evening I got to eat the most fab dinner ever of SurfnTurf - steak and lobster tail.  The lobster tail, although looked small before cooking, revealed a big massive lump of meat which with a small smathering kerrygold butter was divine. The steak was lovely too.

And the Key Lime Pie...dear God the pie. It may be only the second best pie on the island but last night it got my gold medal  Good job Winn Dixie!

After dinner I watched an old (recorded) episode of Jeopardy.  I had watched it before but was happy to watch it again because I am Completely Obsessed With, and Addicted, to Jeopardy.

It was a great day!