From there, to here...a post to bring you up to speed

I haven't been blogging much at all in 2020, something that I was slightly regretting and now with the Coronavirus Pandemic, something I am very much regretting.  My twin sister over on her blog has been doing a great job documenting what is going on in Ireland over the last month or so, and I do wish I had been doing the same.

So! This blog post is to record my thoughts and what has been happening for me, over the last few weeks, and then let's see where I go from there - I would hope I would be better at recording things as they happen.  I need to get the sequence of events down in text because honestly, even now, it is all turning into a bit of a blur really.  So this is really just what I "remember", I cannot unfortunately swear to the accuracy of it!

Ok, well first of all let me assure you I was aware of the coronavirus from early January.  I don't live in a total bubble! And I do read a million newspapers online daily, and peruse another million discussion forums etc.  Oh and I get the New Yorker delivered every fortnight lol. And that is not to mention what I pick up from facebook and twitter.

An easy marker for me is St Patrick's day.  Probably about 10 days to two weeks out from the 17th of March, Ireland was starting their fight against coronavirus and as part of that the St Patrick's day weekend celebrations were cancelled (all over Ireland - the biggest parades being Dublin and Cork).  A smart thing to do - a large gathering of people is clearly a magnet for the virus to be spread.  It should be noted that nowhere in the UK (e.g. Manchester) cancelled their Paddy's day parades.  Also the Irish Government cancelled (or banned?) the Six Nations rugby match between Italy and Ireland.  They say this was done a little late and still a lot of Italians travelled to Ireland, but at a minimum it did stop the large crowd of spectators crammed in together in the Aviva stadium.

At this point in Key West we really were not feeling, or seeing any impact.  Life was going on as usual and business was as usual.  Town was full, and all bars, restaurants and hotels were all open and operating as normal.

Now moving forward to closer to the 17th of March.  Things still "as usual" in Key West, people talking about coronavirus but very much in the context of "how it was affecting elsewhere".  Me talking about places like Ireland, Italy and Spain.  Other places in the USA being discussed e.g. the nursing home in Washington where there was just utter decimation of the poor resident's lives. RIP. But still nothing about Key West, and at this point no discussion about it even arriving at our door.  I know, I sound naïve, I can't capture in words how insulated one feels down here - one feels very remote to the real world at the best of times, and clearly the same at the worst of times.

We hosted a St Patrick's day party on the 15th of March.  With hindsight, the optics of that don't look great.  At the time I had no concerns.  Well actually, I did post one post on the facebook post on the party invite page saying if anyone had symptoms to stay away (different wording lol!!)...but important to note that at this point the "the asymptomatic carrier" did not even enter my consciousness.  I tapped elbows with everyone who arrived but there were other people who hugged each other, and definitely we did not stand 6ft/2 metres apart. The coronavirus was one of the biggest topics of conversation, but it was by no means the only one.  One or two people did mention that they were planning to hunker down and stop going out after the party.

So then, this is where things began to ramp up.  I believe on the 16th of March, by order of the Governor of Florida all bars were ordered to be closed and restaurants were to reduce their seating capacity by 50% in order to allow patrons to socially distance while eating.  The city of Key West went one further and ordered all bars and restaurants to close completely on 17th of March (17th of March!! St Patrick's day! Traditionally a BIG day and big holiday period in Key West).  Later during the week it was further ordered that all lodgings/rentals/hotels were to close on the 21st of March.  Thus meaning that by Sunday 22nd March the island should be inhabited by locals only. 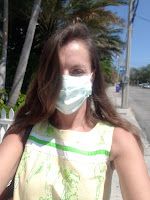 Since then everyone has pretty much started and continued to "stay at home" and I think my previous blog post takes up from that point onwards...

Onwards and upwards!  Stay well, stay healthy, and stay positive.  We will get through this.  It is going to take time, how long I do not know, but what I do know is that if we all play our part the quicker it will be.

Oh! On that note about everyone playing their part - yesterday it was widely reported around the world about Ireland's Taoiseach (Prime Minister/leader) Leo Varadkar, who has re-registered with the Irish Medical Council and will be working as a doctor (his previous occupation) for one day a week during this crisis.  Talk about leading by example and being unafraid to roll up your sleeves and get stuck in.  Good man Leo!  I have been the first to criticize our Government in the past but I am extremely proud of how they have managed and guided Ireland during these unprecedented times.
Posted by AmyDublinia at 11:11