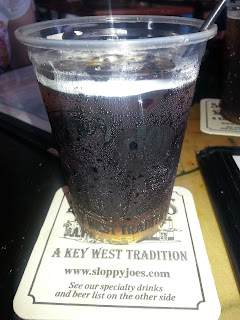 Plus as their beer mats say - it's a KW tradition.  Who am I to argue.

Why is this post titled "Sneaky Drinks"??!!
Because any time I went here on this trip (a) it was not planned, was a inpromptu "sneaky" trip and (b) someone ended up being put out that they didn't get to go.

On my very first day in Key West, dad and I were going on the Trolley tour.  We arrived to the Trolley pick-up point with about a half hour to spare.  It was very hot and we didn't fancy sitting out for a half hour, plus I was feeling a little weak (low blood sugar) so I suggested to dad we go somewhere for a quick nibble/plate of french fries.

First place we came upon was Sloppies and even better than just plain old French Fries we ordered CAJUN FFries.  Nyom!  Plus I had my first official alcoholic drink of my holiday - first of many.
When we got back that evening and told Mam & Katie that we had a sneaky run into Sloppies and had Cajun FF's Katie was just disgusted she was not there! Next time we went in was after our snorkel trip - Dad, Katie & I popped in for a sneaky spot of lunch.
Katie had a burger.  Dad had hot dog.  And I had a fabulous Crab Sandwich.
We shared a portion of Cajun fries.

Mam said she wanted to taste these fries soon. 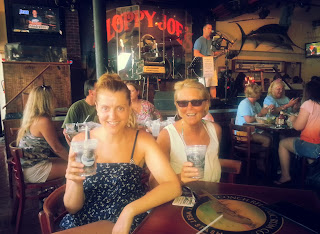 So on an afternoon when Mam and I were shopping on Duval (Coach and Banana Republic) we stopped in for a drink and some fries.
We ended up having more than just one drink :-) Mam is a big Hemingway fan so we enjoyed looking at all the Hemingway photos and memorabilia on the walls - particularly the photos of the winners of the yearly Ernest Hemingway lookalike competition.

Final trip in to Sloppy Joe's was of an evening when mam and I were walking past and heard a great band singing The Eagles "Welcome to Hotel California".
To our surprise it was a group of local teenagers.  And even to more of a surprise we found out that only one of the band is a teenager (middle guy is 15) the two on either side of them are only 12. 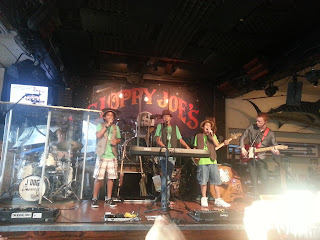 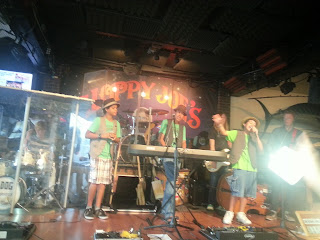 They were incredible singers and the little guy on the right was a real little superstar.

I don't know the name of their band unfortunately.