The Key West Aids Memorial is a beautiful tribute to all people who have died from AIDs and who lived in or loved the Keys.

It was built in 1997 and is maintained by a group of volunteers.

From the memorial's own website:
t might be hard to understand now, but on an island of less than 30,000 year round residents, AIDS and HIV had a devastating impact including the loss of over 700 friends and neighbors to AIDS related illnesses in only a few short years. No segment of this island’s community was spared as prominent business owners, housewives, Conchs, service men, gay and straight alike contracted the dreaded disease.
According to The Centers for Disease Control, Key West had one of the highest AIDS rates per capita in the United States in 1988, based on the number of diagnosed cases per 100,000 people:
• Key West (Monroe County): 121• San Francisco: 102• New York City: 63• Greater Miami: 45• Greater Ft Lauderdale: 37
Not only was Key West battling an epidemic few people understood at the time, but it was also becoming a refuge for hundreds of people who were diagnosed elsewhere but felt they could not remain at home in what many considered to be hostile environments. So they moved to Key West, which drove the “real” numbers much higher and put an overwhelming strain on the medical resources of the tiny island community.
Today, the Memorial bears the names of more than 1,000 people who have died from AIDS in the Florida Keys. It is the only official municipal AIDS Memorial in the world and serves as a tribute to the accepting and generous community of Key West. 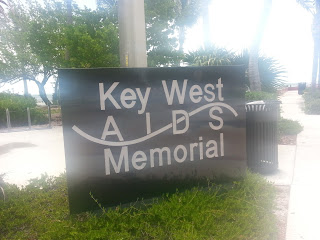 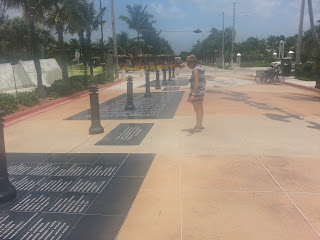 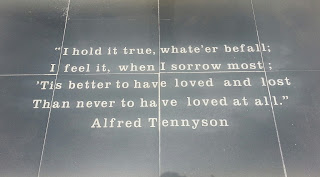 Such a terrible terrible disease that now thankfully a lot more people are dieing with, rather than from.
And while a very sombre memorial it is very beautiful.