Enid and I went out and joined a canal clean up group on Saturday.  Last "TeamCleanupDublin" meet we went to was back in April in Ranelagh - my blog about that is here. And in the past we did a lot of clean up meets on the Royal Canal (West/Northside).

This time however it was the Grand Canal. We met at Waterways building near Grand Canal theatre where we met a lovely woman who while had partaken in it before was running it for the first time.  She got involved in it primarily because she lives in the docklands on a houseboat.  How lucky is she!

Once we had signed in and got all our gear (gloves, hi vis, picker tools) we set off  I had assumed we would be doing something similar to our Royal Canal days i.e. walking the length of the canal between locks, and picking up the litter on the canal paths and in then bushes.  This was different: we concentrated on the Grand Canal basis and we were also pulling out rubbish from the water. 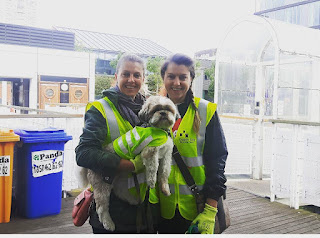 I love this dog.  How adorable does Bones look in his hi vis jacket.  Plus the head on him is always adorable.  He was a pain however!  Enid let him off the lead and was like a lunatic when other dogs came along.  So then she had to manage him on the lead while trying to work.  Eventually she rang Ciaran to come get him. 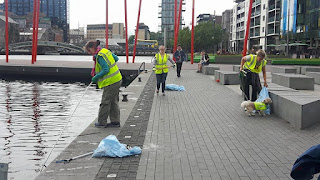