Stuff.  That is going on. 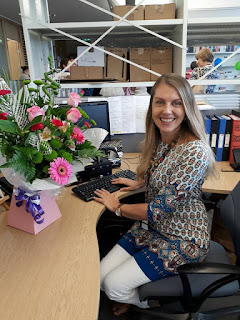 Enid moved job!
She has left Fingal library services after 17 years and is moving to a new library in a different area. 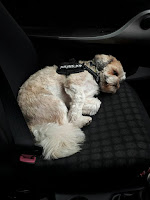 Before Enid starts the new job she is going on a holiday.  Which means Bones is going to his grandparents!  T'his is him being dropped over - that dog gets more like a baby every day.
There is a funny story about Bones and when he stayed/stays in Lyttle Holme (well a few stories actually).  So first one is that he is only recently back staying with Mam and Dad.  This is because of some bad behaviour a couple of Christmasses ago involving incidents of eating things he shouldn't have namely two cupcakes, a Christmas pudding AND a little small antique book.  Come on! Seriously Bones! A book?? Enid denies it but I was there and saw it all!
Anyway Enid was stuck for a minder a while back and Mam said she'd take him again.  And wait for this.  He now sleeps on the bed with the two of them, and gets gravy on his doggy biscuits.  She has him ruined! 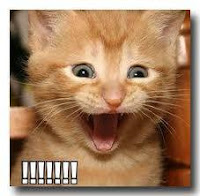 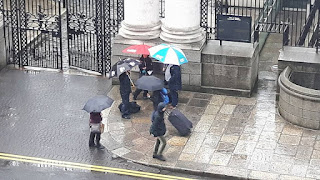 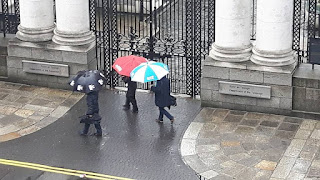 The umbrellas aren't clear but they were from RTE, TV3 and FM104.
It made me think of the end of Anchorman when the tv hosts arrive from all the different networks and channels, and at 7.30am in the morning it made me smile.