Yesterday I had a couple of hours spare to myself so I took myself off to see Rocketman at the Tropic Cinema in Key West...
.
.
.
.
.
.
.
…ummm, so I'm coming back to this blog after an hour or so has passed since that first line above.  The Tropic Cinema got me thinking about Judy Blume (she, and her husband George Cooper conceived and funded it), and that got me to reading articles about Judy Blume. This Guardian one here was particularly enjoyable. The last hour of my life has been a good one!

Hey did I ever mention that I have met Judy Blume?! In fact, I've met her twice.  My second meeting with her was extremely special to me because I told her about what was going on in Ireland in respect of the fight for Irish women's rights and bodily autonomy at that time, which she listened carefully to, and pinned on a badge that I brought her showing her support for the referendum to Repeal the 8th Amendment.  She was awesome both times.
How friggin' lucky am I???

Well I better get back on topic and tell you how much I loved Rocketman.  I thought it was great and would actually go see it again straight away (if you are a regular reader of my blog you will know how obsessive I get about films that I like and how I like to see them multiple times...case in question..La La Land!!! Which I saw about six times over three weeks in the cinema!!).

I thought it was heartbreakingly sad, but also theatrical, fantastical and ultimately uplifting - by the end.  I recommend this film thoroughly, go catch it in the cinema before it closes! 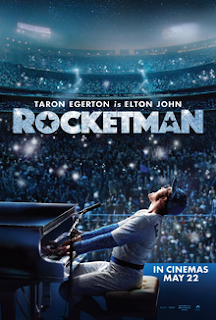