Myself, Katie and a friend of mine went to a medical talk in Trinity College last Wednesday.
Myself and Katie had initially actually planned to go to a talk in the National Library on Kildare Street on DNA testing and the use of DNA testing in tracing your family tree/roots.
However then Cillian texted me to see if I wanted to go to a talk on Cancer in Trinity that same evening, so Katie and I said we'd go to that instead. 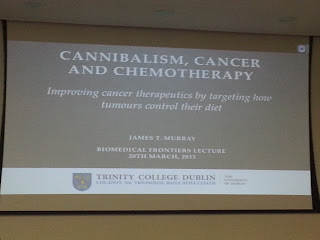 The talk was presented by a doctor from the the Biomedical department in Trinity.  It was about cancer cells and how they proliferate and the work that this department is doing in researching how to target (and destroy) cancer cells.  They are doing this work with a particular compound (not named as far as I could discern :-) Top Secret!) on the cell during a particular piece of the tumour cell growth process.
I won't lie to you.  It went waaaay over my head.
But I still enjoyed it - both doing something different in the evening in Dublin, plus also I enjoyed challenging my mind (even though, as I noted, it went way over my head!).﻿ 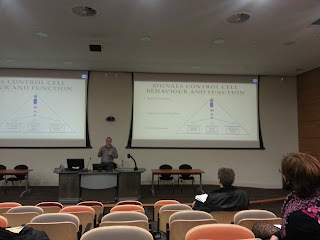 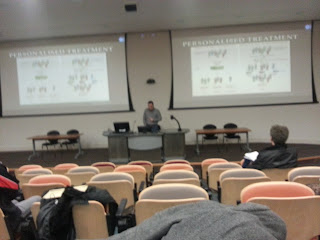