A Day in the Life

Ugh!  Technical problems between my phone and stupid laptop means that I can only upload 3 of my photos to this blog, even though I took a good few more than that.  Apologies in advance.

Tonight I went to a lecture/book launch of "I Read The News Today, Oh Boy" which is the newest book from Paul Howard.  Paul is of course also known as Ross O'Carroll Kelly - and has written 17 RO'C books under this pseudonym over the last 10 years.   This book is a little different from the Ross books!

The book's genesis was an article that he wrote a few years back for the now defunct Sunday Tribune which when published he realised (plus people said it to him) that the story of Tara Browne deserved much more than just an article.  And so began his decade of research and interviewing of people who knew Tara, to tell the story of his short but wonderful life and the impact he had within that time. 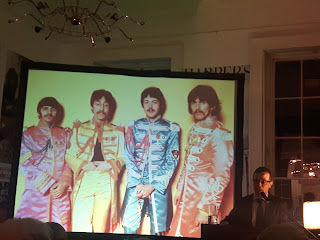 Paul started by setting the scene of 1967,  The Beatles working in the studio and how John wrote A Day in The Life after flicking though the Daily Mail for inspiration - where he saw a newspaper report on Tara's death at the age of 21, and the subsequent granting of the custody of his two infant boys to his mother (and not his wife/the boys mother...)

We then were treated to the full story of Tara's life from his bohemian upbringing in Wicklow to his moving to France and then London his early teens at a pivotal time in history - the swinging sixties.  It was clear that this book not only captures the spirit of a person (Tara), but also the essence of a time and a place 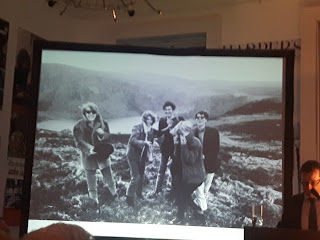 I love this photo and story of The Rolling Stones, designers, musicians, models and other "celebs" of the day coming from London to Wicklow for Tara's 21st birthday party.

Paul Howard as most of us know is a talented writer, but he is also a beautiful speaker and storyteller and I really enjoyed the evening.  I am very much looking forward to reading this book now! 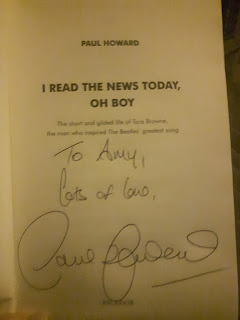 I had a lovely chat with him about The Beatles and my recent trip to Liverpool - he then told me about some great Beatles stuff you can do in London which sounded great.  And of course he signed my book.