This morning I got up early (for a Saturday!) and cycled into my office where I met up with a small group of colleagues who were all there for the same reason as myself - to see our beloved "Chariot of Life" statue being moved to its new home.
Our campus is undergoing a large regeneration project, and as part of this the statue is being moved forward on our main plaza towards Abbey Street where it will be more accessible by the public and the surrounding community. 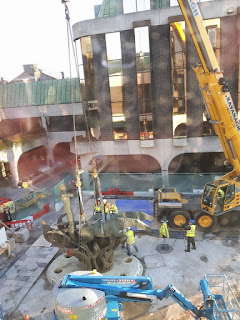 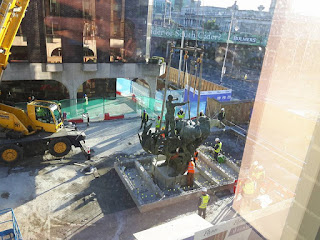 These photos are not great but as a record of the event they serve the purpose.  There was a company photographer on site to take photos too so if I see any on facebook etc I will post here.
It was a pretty big job - that statue weighs 5 tons!  But the engineers had it all under control and it was a pretty seamless job which took about an hour all in - but just approx. 5 minutes for the actual move once it was up out of it's original plinth.  The main bulk of time was spent taking it up, and then placing it down.

After this I went into college for the morning and most of the afternoon.

On the way home I dropped into The Kemp Gallery to see my brother in law Ciaran (aka Pigsy) and Kemp creating some collaborative art.  A good day of painting needs some good beer so they were drinking some craft beer from O'Brother Brewing - who had provided the beer for the opening night. It seemed to be doing the job as they were working on a great piece when I arrived. 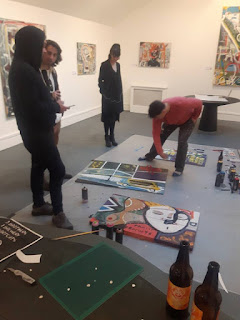 That's Ciaran in the red, and Steve on the left of the photo with his hood up 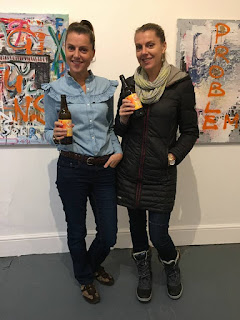 I'm not a big beer drinker but I did enjoy sampling "The Fixer" while watching the art in progress and chatting with the lads and Enid. Oh and also! Ciaran sold two paintings today!!!  Sure it would've been rude not to toast to that! Simcoe
Posted by AmyDublinia at 12:50