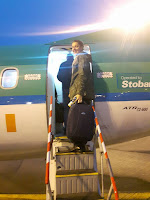 Obligatory pre-trip shot of Enid boarding the plane. Normally it's Ryanair and she has a puss on her face lol. 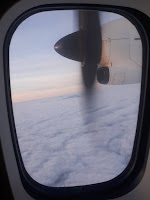 The view out the window was lovely but further below us it was not.  The weather had turned by the time we arrived to Liverpool from Dublin and there was a bad fog in Liverpool.  We circled the airport for a whole hour, and at that point diverted to Manchester.  We had no real agenda so it didn't bother us too much, but I did feel bad for people who were flying in for specific appointments etc.  Aer Lingus had a coach ready on our arrival and it was not too long of a drive from Manchester to Liverpool - plus it was a nice drive in English countryside. 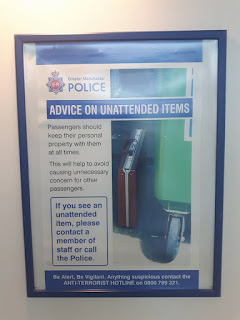 I thought this photo was funny in Manchester airport.
"Hellooooooo! 1983 called, they want their briefcase back"
Like clearly there is something suspicious about this briefcase - it has time travelled back from the 1980's!
So on to Liverpool!  I am just going to post about the highlights of what we got up to. In no particular order, and I am leaving some stuff out but you will get a feel for our trip no doubt. 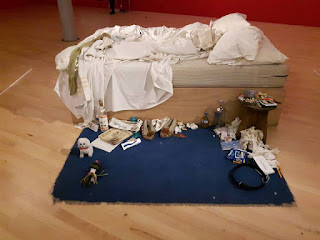 One of our main priorities of the trip (aside from doing lots of Beatles stuff!) was to visit The Tate Liverpool to see the Tracy Emin exhibit "My Bed",
I've been intrigued and fascinated by this art installation for the last 20 years and have always hoped that some day I would see it.  And now I have.
And now that I have seen it I actually don't think I have the words to tell you about it!!! It really needs to be seen to be believed.  It impressed me and appalled me in equal measures. And interested me, and repulsed me.  Quite amazing really. 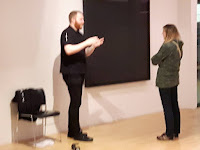 This fella here spoke with Enid for 15 minutes about this picture...
Poor Enid.  She was overwhelmed(!)  Like she likes modern art and all....but! 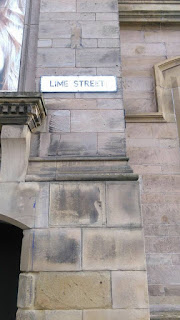 The other highlight (aside from all the Beatles stuff!) was THIS!
This is Lime Street.  Unfortunately the sign is pretty faded and didn't come out great in then photo.
When Enid and I were in our early teens we used to read (and re-read!) and adore a series of 4 books by Liverpool author Helen Forrester.  The first book was "Twopence to Cross the Mersey", and then the final one in the series was "Lime Street at Two".  They are wonderful (true life) books about her and her family life just after the blitz in Liverpool.  Hers was an interesting story because her father and mother had actually been well off but their father had lost all their money in a business deal so the family were living in poverty in the 50's which while hard for all at that time, considering their background, and their (posh!) accents was even more challenging for them I think.
When looking at Google maps we had seen that our hotel was near to Lime Street so we said we absolutely had to visit. 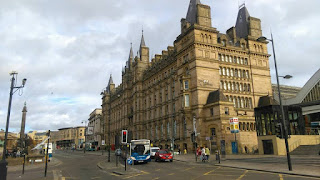 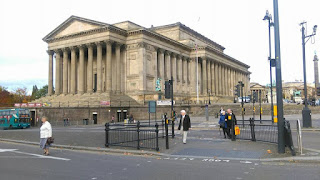 By visiting Lime Street this brought us into the Cultural Quarter so that was definitely a trip well worth making as you can see from the two photos above! 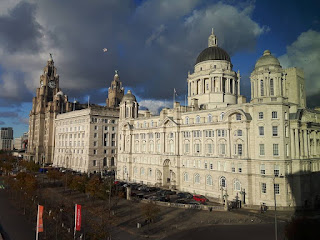 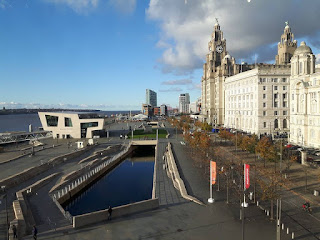 These two photos are from down near Albert Dock.  Liverpool was a much nicer city than I was expecting.
As well as these lovely old buildings, there also were some very nice new modern buildings.  You can really see that Liverpool has been through a large rejuvenation.
The Beatles!!!
As a teenager I devoured books about The Beatles and listened to my dad's old tapes obsessively.
To be honest I had forgotten how great all their music is, and my obsession may be back...! 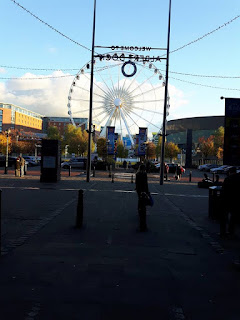 The entrance at the front of The Beatles Story 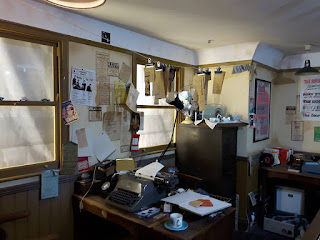 The museum is done very well with important aspects of the genesis of The Beatles recreated e.g. The casbah, the Hamburg star club, and the Cavern of course.  This here is the Mersey Beat office who were huge advocates of The Beatles and really quite integral in spreading their fame. 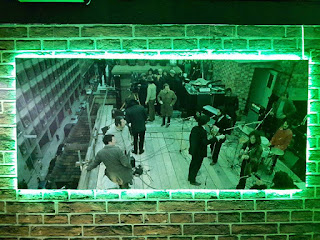 One of my favourite pieces of Beatles history - the band singing Let it Be on the roof of the Apple Offices in 1969.  One of their last appearances together. 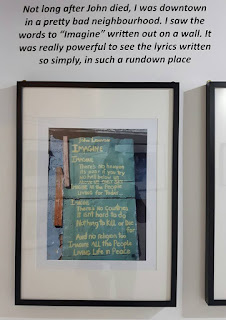 Some of the lyrics of Imagine.
John Lennon, what a man. 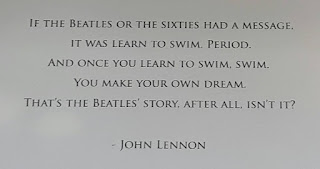 This was up on the wall of the airport when I was leaving.
It says a lot to me. 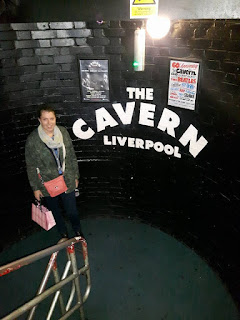 We also visited The Cavern, and it was brilliant!  It's a real live music venue still to this day. We saw two great young fellas playing guitars and singing Beatles and Bob Dylan songs. 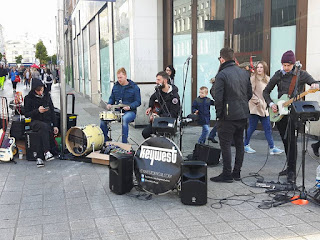 ﻿
Close to The Cavern was the Irish band KeyWest!
It was odd seeing them here as normally I see them on Grafton Street of a Saturday. 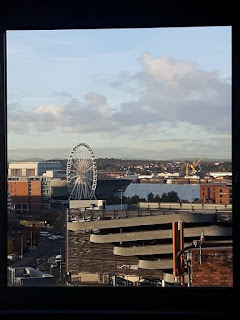 This was the view from our hotel on the morning of the last day! As you know it was foggy and misty when arrived.  And it was like that on Day 2 as well.  So it was nice that it cleared so that we could see this great view at least once before we left.


We were situated near Liverpool One which was a really nice shopping area - so sure it'd be rude not to have checked it out eh!﻿ 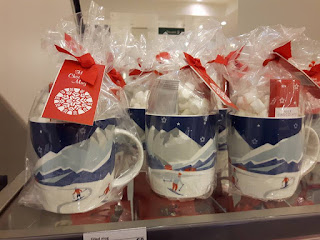 John Lewis had some fab Christmas stock - as beautiful as their lovely Christmas ads! 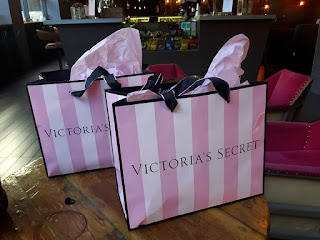 Yup.  I went lunatic in Victoria's Secret.  I always do whenever I am in a city with a VS store
...I really wish we had one in Dublin.
We also did some clothes shopping and I got a few nice bits.  In particular a fab skirt which I'll wear at Christmas.  Oh and we bought lots of stuff for Christmas - that Enid, she loves Christmas, she's an awful bad influence on me! 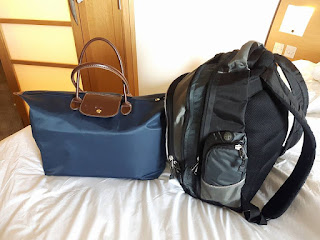 Eek! All that shopping was difficult to pack.  I had packed lightly on the way over (just the backpack) but my TWO bags were stuffed full on the way back. 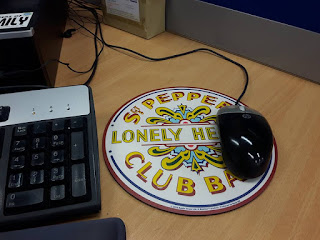 Today in work my new mouse mat made me smile. 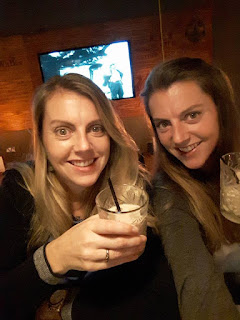 Cheers! In summary, another great trip away with my twin sister :-) A big thank you to her for doing all the organising and booking!﻿