When my dad was about 22 he purchased a motorbike. He would have been involved with motorbikes from a very young age and all his brothers had motorbikes etc.  But this was his first "own" bike so he always counted it as his first bike proper.
Here are some photos of him on the motorbike - a Yamaha 650.  This was taken outside a garage where dad worked.  The story I believe, is that a young photograper from Neil Campbell-Sharp studio (indeed it could have been Neil himself!) asked dad could he take some photographs of him and the bike.
The results are as follows! 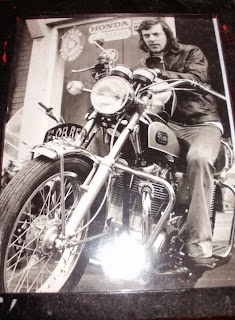 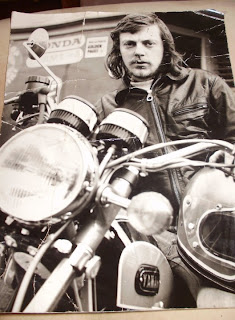 Pretty cool photos I think you will agree?
Anyway, obviously that was all about 30/40 years ago and the bike was sold on a long time ago.
But then about 10 years, ago my dad started to get a hankering for his "first bike" and wondering where it was and was there any chance he could get it back.  He set about tracing it and through the tax records he was able to locate the current owner.  Pretty good detective work I think - this was before facebook and twitter etc :-)
He wrote off a letter to the owner and shortly after he received a letter from the guy.
It was a pretty funny reply!  I wish I had the letter to scan.
The man said - and I am paraphrasing here - "Oh man, I absolutely love that bike.  And I really do not want to part with it.  But I do understand about it being your first bike, so as much as I love this bike I will sell it back to you.  BUT, and I am enclosing a photograph, as you can see I have done extensive work on the bike and remodelled it so it looks different to when you had it.  So I am not sure if you will actually want it when you see the photograph".
He then signed it off: Yours, in Easy Riding xxx xxxx (we all found that pretty funny!)
The photograph the man sent showed that indeed he had done a lot of remodelling to it.  In fact he had turned it into what is known as a Chopper - a bike with very long forks.
So as much as dad knew that this was his own bike he said he just couldn't connect with it as it didn't look like his bike.  So he wrote back to the man telling him to keep the bike (and I am sure he also wished him many years of "easy riding" lol) and then he set about locating purchasing an exact model/replica of his bike.
He located that about a year later - he had to import it from the States - and here is a photograph of it. 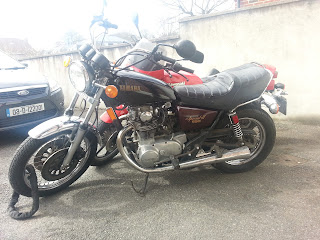 Hope you enjoyed the "story" and to any bikers out there:
Yours, in Easy Riding
Amy