Today I saw a fox in Dublin CITY!  Yes in the city!!
I have always heard rumours about a fox's den in Dublin but I always pictured it being somewhere near O'Connell Street for some reason.
He not so much ran across the road, I would actually describe him as gambolling across the road.  He did not seem scared of the traffic yet he was also neither overly brave in his surroundings.
Unfortunately I was too slow with my phone/camera :-(
So instead, using the magic of Google Streetview, I thought it might be interesting to show you where I saw him. 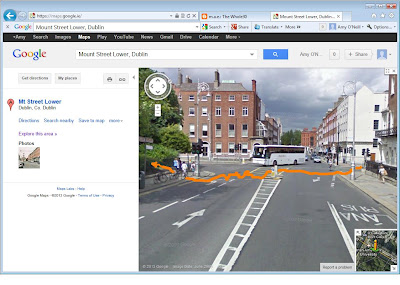 As you can see this is Mount Street/Merrion Square.
He came from the side of American College Dublin crossed the road right in front of me and skipped through the railings into Merrion Square.
Things to note about my encounter with Fantastic Mr Fox
(1) I don't know why I am assuming the fox was a "he"
(2) I still cannot believe we have foxes in Dublin CITY!
Update 05/05/05:
What a co-incidence!
Today in the Metro I read an article about a project group who are trying to collect data on foxes in Dublin.  I had literally just read the article when my sister Katie of the very funny and clever Binary Pixie blog (follow her!) texted me a pic of the article and asked had I seen it.
They have a facebook page, a twitter account and a facebook so I am going to post a link to this post on their page.
Below are some pictures of the article.
But before that some further musings on my encounter with Mr Fantastic Fox.
(1) The colour that I chose to "paint" his route on the photo above was chosen specifically - it was the closest I can get to show his colour.  He was an an almost bright orangey rusty colour. And he seemed to be an all-over colour, no white.
(2) The more I think about it I think it was not an adult fox.  Now of course I don't really know that much about foxes but this one just didn't seem fully grown to me.  I would describe it as about the size of a big West Highland Terrier.  Anyone out there know what size a fully grown fox is??
(3) You will notice that the route I painted on the photo above is not straight.  In particular it is "squiggley" on the left hand side.  That is done on purpose to show the actual route Foxy took - when he was on the left hand side of the road he looked like a little puppy! 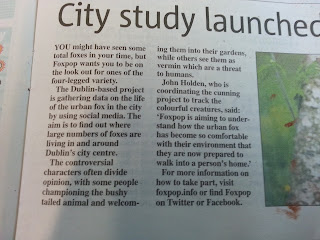 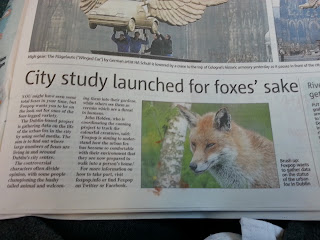