Enid, Katie, Lydee & I were back outside the Dail on Wednesday.  While we were outside, inside the Dail the proposed abortion legislation was being debated and voted.

It was a freezing cold night.  There were a group of young women (early twenties) who had camped out on the Tuesday night so as to be there when the politicians were arriving at the Dail on Wednesday morning.  Fair play to them.

The speakers were very good and there was some great loud chanting which would have been heard inside the Dail:

"Not the church, not the state, women must decide their fate"

"20 years is too late, it is time to legislate"

Inside the Dail however the motion was defeated.  However Enid has assured me this is just the beginning - this was a hasty and rushed through wording. 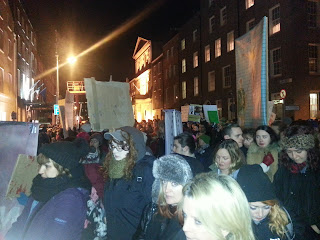 I will be at the Dail every Wednesday until we get the law changed. Never again.
Posted by AmyDublinia at 03:00