Firstly, apparently I spell barbecue wrong.  Thanks for that point out reader! Reader. I have a reader! Woohoo! *Waves to reader*
Secondly, the culinary adventures continue.  Tonight on the menu was plain old chicken which turned out to be anything but.  In fact, it turned out AWESOME! Interested? Read on my friends, read on! 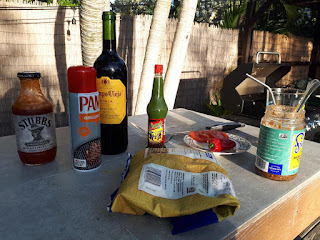 Here are of some of the essential requirements for Amy's Awesome Chicken:
1. Red wine...rioja...I was never much of a rioja drinker in Ireland, preferring an (even more) full bodied grape such as Malbec, Syrah or if I was feeling wild a South African Petit Verdoh.. 2. Green salsa brava hot sauce purchased from the local Mexican shop for $1.39 3. A red pepper chilli from same Mexican shop - 29c 4. Pam oil for the barbeCUE. Yeah it's cheap, and a little bit nasty, God knows what is in it but it gets the job done 5. Only the best "BBQ" sauce in the whole world.  Not too sweet and nicely tangy - dare I say it, even with undertones of HP brown sauce at times - this sauce is incredible.  Keep an eye out for you on your next supermarket visit; Stubbs Original Legendary Bar-B-Q sauce. 5. Frontera (red) salsa sauce That's a nice little bit of heat there as you can see.  Eating and enjoying food with a sizzle in it is a skill of mine I picked up in the Navy.  Ok I think you know I wasn't in the Navy.  That's something I just like to say for fun.  Hmmm, probably sounds better when spoken.  Moving on. It's true though.  I love hot food.  It's a taste I started developing way back when my friend was going out with a fella who owned a couple of Indian restaurants around town.  We were aged 20 and penniless and ate there a lot. Some days we used to eat the staff curry which was blow your eyeballs out hot #goodtimeswithTara&Amy A couple of years later I visited India, and ever since then, as cliched as it sounds, the hotter the better for me. 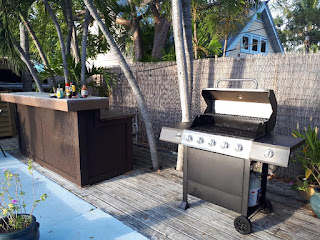 I like to assemble all my cooking ingredients and utensils on the bar for the cooking.  Yes I have a home bar. Yes it's outdoors.  Yes I am not using it for the purpose intended.  I know, I know, old Amy who used loved nothing better than hopping behind a bar and whipping up a cocktail (crafting, I believe they say these days) or pouring a pint, is probably turning over in her grave back in Ireland.  But such is life, time moves on and ones interests change.  No doubt some day this bar will be used for entertaining, but for the moment it is a food prep area. I posted this photo to show you where the barbecue is set up in context to the bar, and I think you might agree it's pretty perfect. Side note. If you would like to try out my recipe for my very popular at parties caiproska cocktail click here. 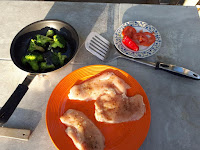 3 nice flat (more on that below) chicken fillets, broccoli left over from yesterday's dinner (Chinese), and tomatoes. 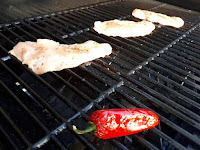 I noted above that these fillets are nice and thin.  Different to the fat plump ones in Ireland.
These are perfect for the purpose of barbecuing. 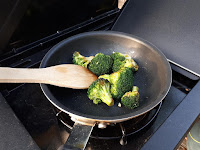 I whizzed the broccoli around in a small bit of olive oil and garlic.
When buying the barbeque, we had hummed and hawed over a couple of different models.  The fact that this one has a side burner for cooking in a pan or pot was one of the deciding reasons that we went with this one. 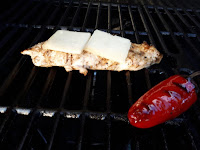 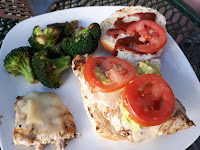 Someone was a little more sophisticated than I and  hadtheir chicken on a Hawaiian bread roll (lightly toasted on the barbecue) with some guacamole, tomatoes and bbq sauce. Along with the side of garlic broccoli.
Whereas I just went lunatic and dumped every since sauce known to man (or to our kitchen cupboard at least) all over my chicken.  Yes, I ate that chilli too.  Did I mention I like spicy food?