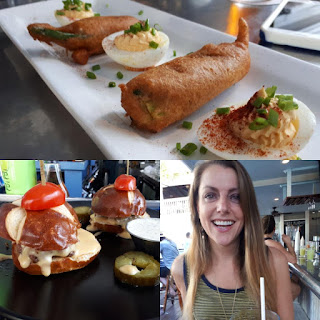 First Flight KW is the current incarnation of what used to be Kelly's Key West.  Kelly's was so named because it used to be owned by the actress Kelly McGillis.

When it was called Kelly's it was fittingly air travel themed - a little bit of Top Gun (her jacket from the film was framed and on the wall) and a lot of Pan Am. It being the birthplace of Pan Am and tickets sold from here back in 1927! How cool is that.

Sadly now the Top Gun memorabilia is gone.  But the Pan Am stuff remains.  One of my favourite items is a large poster/ad for travel to Florida from the 1980's.  It's in the back room, be sure to check it out if you go.

From a food/beer perspective it was ok! Some food was better than others.  The wings (not pictured) were actually very good.  We got the thai hot chilli.  The fried oysters (not pictured) were totally meh.  They literally could have been anything, deep fried in a (lovely it has to be said) southern fried chicken type batter.  Lesson learned, oysters should be just eaten, not messed around with.  I liked the pretzel sliders with beer cheese, my date not so much.  The devilled eggs were very nice! And strangely enough the jalapeno poppers (aka deep fried jalapeno peppers) were divine.  Hot though! Be warned. 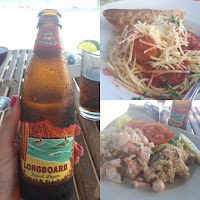 Salute on the Beach! (there is an accent on the e which I don't know how to do on the laptop means it is pronounced Salutay).
Well this place was just super.  Nice food - I got meatball marina and spaghetti which I know is unusual for the beach and for the weather but I just craved some intense tomato flavor and boy did I get it.  The garlic bread it came with was another intense one, I swear the garlic was roasted before being applied to the bread.  My date got a shrimp salad sandwich and it was generous in size and as expected in flavor.

The drinks were "ok".  This longboard beer was fine for one or two, but no more.  The pinot noir was fine but I really would have killed for something a little different (a Malbec, or heck even a bog standard old cabernet sauvignon).  The other option for wine was a montepulciano which I am not sure would have been much better. 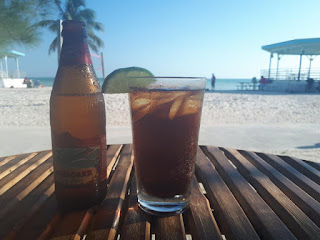 But heck the best thing about Salute (Salutay!) is the location.  I honestly think we had one of the best seats in the house.  Our table was literally at the restaurant edge/right on the beach.

Look at that view!

We ended up staying there for nigh on 3 hours and it was just a lovely evening and a great way to finish a long weekend (it was President's day in the US) so yesterday was a Bank Holiday Monday.