I'm a reasonably travelled person I like to think.  And thankfully I've never missed a flight.  Well on Sunday we were thiiiiss close to doing so.  Listed below are a litany of issues we encountered on our trip to Key West

Enid and I arrived at Terminal 2 at 7.00am for our 10.05 am flight to Toronto (3 hours in advance of our flight time).
According to our itinerary we were flying with United.

Issue 1: There was no United Toronto flight listed on the board.  A lady working for United told us we were actually flying with Air Canada (ummm not according to our itinerary!!!)

Issue 2
If you recall our flight time (noted above) was supposedly 10.05 - again, this was according to our itinerary.  There was no 10.05am Air Canada flight to Toronto listed on the board.  Instead there was a 9.05am flight.  This meant our 3 hour timeline was suddenly reduced to 2 hours

Before we could even get into the queue for check in we were met by a Swissport/Air Canada official who told us we needed visas for our Toronto layover.
Enid and I quickly went online and applied for the visas (took about 10 minutes and cost CAD $7).

We will take responsibility for this! We should have checked if a visa was needed - even though we were just transiting through.

Issue 3
Enid got accepted immediately.  My visa was "referred for review, we'll be back with a decision in 72 hours"

Alice had arrived at this point - and her visa application was accepted automatically also.

Enid and Alice got into the queue and I went off to the Swissport desk to try ring Canada to see what was happening with my application.  Literally as the guy got through to Canada I got an email through saying my visa was accepted.  I ran back to Alice and Enid who had just arrived at the check-in desk. It was now 7.40am.

So you're probably thinking that surely nothing worse could happen.  Well you'd be wrong

Issue 4
At the check-in desk we were told that we were not flying Air Canada but United ("as per your itinerary") and need to go to Terminal 2.  After explaining we were there already - and that in fact the 10.05 flight did not even exist the staff member looked up the flight number

Issue 5 - and this is the major one!!!
The staff member stated that no tickets existed for us!
Even though we had booked the flights back in January 2017.  Even though we had been getting monthly emails/updates from ebookers.  No Tickets!  What does that even mean??

We were told to go to the Swissport desk to explain there was a "ticketing issue".

So!  It is now 8am (remember check-in closes at 8.05) and the ticketing issue still is not resolved!

Enid runs back to the check-in to see if they can hold open the check-in for us.  Apparently they can't.  Which seems strange considering this is their massive cockup with their incorrect itinerary (airline and flight time).
Hmm on second thought maybe it is ebookers or United, and not Air Canada's mistake??

She arrives back and literally right at that moment we are handed two passports (mine and Enid's) and told our tickets are sorted.

We run back to check-in where they (thankfully!!) OPEN check in for us in order to check in.  Alice arrives 2 minutes after.

We RUN. Alice grabs a security guy and explains (very quickly) about the whole debacle.  He RUNS us through security in 5 minutes - although not before Enid's bag is pulled for a random drugs swab,

Alice and I leave Enid and run through the airport to our gate.  From here thing go smooth we are given new boarding passes with seat numbers (all separate - that's ok) and on we board.

We are off!  A trip, 3 years in the planning and all of the above happening before we even left.  Not good for the heart I tell you!

Posted by AmyDublinia at 19:19 No comments:

Nostalgia's not what it was

Following on from my blog post last week, the excitement about Irish artist Pigsy's exhibition (Nostalgia's not what it was) continues to grow.

Pigsy as you know is my brother in law - and if you will allow me the immodesty I am just a little bit proud of him. And how could I be anything but, after coming across THIS in the Irish Times on Thursday.  Not bad being referenced in a piece with the incredible Jean-Michel Basquiat eh?! 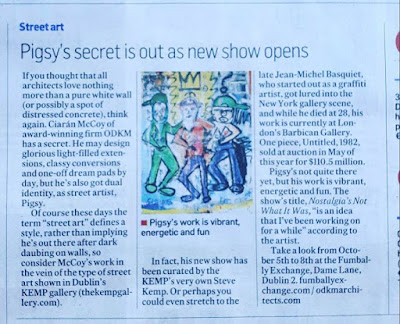 For the online text of the article see here.  And for more info on Ciaran/Pigsy check out his website.

If  you are around Dublin this Thurs/Fri/Sat/Sun why not drop into the Fumbally Exchange on Dame Lane and say hi.  I shall be there most of the weekend helping out and enjoying the vibe :-)
Posted by AmyDublinia at 01:48 1 comment: