At the end of the week of the fun and frolics of Fantasy Fest, it is timely to do a blog post telling you about what my experience was, and my thoughts on it all. (Spoiler! I enjoyed it!)

A little history first! From the official Fantasy Fest website:
"Fantasy Fest is an annual 10 day party in paradise for grown-ups.  Started in 1979 by a small group of Key West locals, the party was created to bring visitors to the island in what was a typically quiet,  but beautiful season.  It worked.  Fantasy Fest has grown every year since its inception and is now the wildest extravaganza around!  Fun-loving revelers from around the globe bring their creativity and imaginations as they descend upon Key West each year in October for 10 days filled with costuming, parades, libations, and excitement!"

So what has evolved over the last 40 years, the result is that we now have approximately 100,000 revellers (3 times the population of the island) parading and partying in the skimpiest of outfits all in the name of fun!

And fun it is!  Yes those costumes are skimpier than you can imagine - think body paint and pasties i.e. a lot of breasts out there for all to see - but heck they are just breasts right?  (Free the nipple and all that eh!). Hells bell's for one week of the year it is a novelty to just enjoy a bit of guilt free people watching.  I say "guilt free" because hey, to go around in those skimpy costumes the wearer definitely has an exhibitionist streak. So you know what; I reckon you're doing them a compliment by looking (or lol in my case, staring!) and admiring.

It's not just the novelty of the nudity/almost nudity that is fun.  There is just a general sense of gaiety, playfulness and abandonment on the island, down near Duval Street. It feels like a lot of adults letting go and play acting.  You know, sometimes being childlike, dressing in costume, and allowing yourself be free can be a very therapeutic thing to do.

Personally, I spent more time out and about in bars and on Duval Street in one week than I ever had before.  We had great fun taking part in the Local's parade on Friday night.  Quirky and zaniness aplenty as you would expect from inhabitants of "Key Weird".  I also enjoyed Tutu Tuesday where I wore an outfit consisting of a swimsuit and tutu.

But what undoubtedly was the highlight - the main parade on Saturday night. Creative and energetic, the standard was so much higher than I was expecting...that may come from the fact that I am Irish and have seem parades in little country villages like Athboy and Trim where children parade while dressed in blue plastic bags representing their local river.  Oh dear!
(Side note.  Readers - If you are ever in Ireland (even Dublin) on March 17th, stay in the pub, warm by a fire and watch the St Patrick's Day parade on tv. My advice for what it is worth).

But right now my advice is, do yourself a favour and watch some videos online of the opening of the Saturday parade!

And finally... Who wants to see what I wore during the week? Yeah, a little cliche I know.  It was my first Fantasy Fest, will do better next year am sure!  Anyway, cliche but fun, it worked! 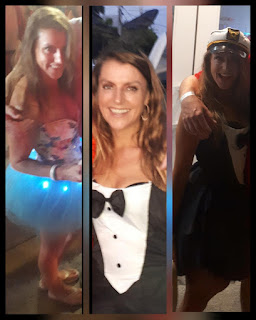 Left - Tutu Tuesday
Middle - Local's parade
Right - Bet you didn't spot that is the same costume because of the new headpiece lol, I mixed it up while watching the Saturday night parade! :)))))

Until next year Fantasy Fest!

Posted by AmyDublinia at 19:01 No comments:

For some time now I have felt Bikram calling to me.

What that translates to is; I haven't been sleeping great.  My mind has been racing, working overtime for various reasons (all pure silliness of course, but you try persuade yourself that at 3am.  Best of luck to you  with it!).   And in terms of body strength and suppleness, I feel like I am losing muscle mass and my body and core is becoming weaker.  Clearly I need bikram bad! And I want it. I know how incredible it is, and how amazing I feel after it. 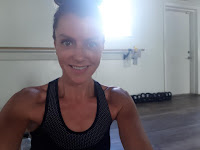 Today, I did something about it.

I don't think I can say anything about bikram that hasn't been said before.  It's cliched but it's true - 90 minutes in a hot room, no phone, no distraction.  Just you, listening to the teacher and moving your body accordingly.  The heat is wonderful.  It helps you stretch further than you have ever stretched before.  Flexibility and stretching is something I have always struggled with, even back in my competitive swimming days I was never flexible, but now, that studio heat helps me push myself further and better than anything in the past (yep that includes all the land training I did in my teens as part of my swimming training schedule). And it's that feeling of satisfaction and pride, that you personally, have done something new and better that brings you back to class. It's a different feeling, one that I am not familiar with, pushing myself alone, not in competition with anyone except myself.

But it's the mental results I like the best.  Sometimes I wonder is it really that easy?  Put away your phone, concentrate on thinking about just your moves and your breathing, walk out of that room 90 minutes later with a clear mind that lasts for days until your next class.
Is it really that easy??  It seems so. 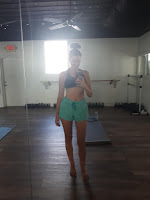 So here I am.  Signed up for a month of classes in the cutest and Southernmost yoga studio in the United States.

Back to the Future

It has NOT been a good week in terms of home cooking for this household.  Having no food in the fridge was obviously key to this issue but also: Because Fantasy Fest!  We ate out a lot this week.

And while this was obviously pretty enjoyable (and yummy etc etc), I am happy to report we are getting back to normal.  And it feels good.

Did a supermarket shop this morning and the fridge is now fully stocked with lots of good food for the week ahead - in particular the freezer is now full of proteins.

So tonight it was a celebration in style of home cooking.  Steak and lobster claws! Woohoo! 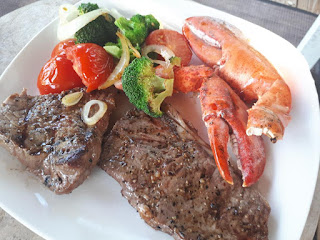 And doesn't it look good!
On the side, a little bit of garlic dipping butter for the lobster, and barbecue sauce for the steak, it was delectable perfection.

Posted by AmyDublinia at 17:48 No comments:

I am so delighted! My vintage "Britvic" pineapple ice bucket holder has arrived from Ireland!

I love this guy :) I first saw one of these in my friend's holiday home in Wexford - it was her aunt's, an original from the 1960's.  As soon as I saw it I was on a mission to find one for myself (at the right price) and finally I found one in the Dublin flea.  It was the princely sum of euro40, which at the time felt at the upper end of my budget, but ten years later feels like the bargain of the century.
﻿
Posted by AmyDublinia at 16:50 No comments:

I had Lydia and Mam staying with me for a week and it was a wonderful visit. I would rate them 10/10 as house guests.   Ahahahahahaa
First day they arrived Lydia and I took ourselves off fishing and it was wonderful!  Even more wonderful was coming home and cooking it on the barbecue.  That is something that I think will always be a novelty to us Irish people...cooking outdoors with regularity.
While it was an ordinary working week for me, I did decide to take a day off in the middle of the week while they were here.  How often do I have guests staying with me after all?  We had a great day - Lydee and I went snorkeling at Fort Zachary Taylor Beach and then did a guided tour of the Fort which was very interesting.  That evening we went to Trivia in Viva which we always enjoy. 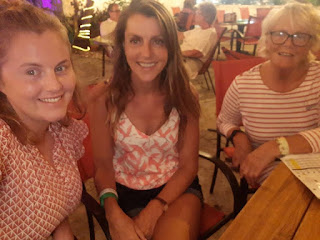 Check us out in our colour co-ordinating outfits at Trivia :)
Other than that, Mam and Lyd looked after themselves during the day while I worked and then we went out for dinner most evenings.  They hung out at the pool, did a little shopping and some sight seeing - Hemingway House was their number one stop as usual.
We had some nice food out at the likes of Half Shell Raw Bar, La Concha and El Siboneys.  It was Mam and Lyd's first time at El Siboneys and their first foray into authentic Cuban food was a complete success.
Their last day came and because their flight was out of Miami, and I was driving them there, we decided to leave early and stop off at an outlet mall close to the airport.  We all got a few bits and pieces which was good.  I got a jumpsuit for work which is a little bit new and different for me.  We also ate a nice lunch in crackerbarrel which we always enjoy :)

Their flight went off on time thankfully, it is a long trip home back to Dublin and even further for Lyd who has to fly on to Amsterdam and then train it to The Hague.  Me, it was a long drive back home too to Key West, and I eventually got there just after midnight.  No worries!  All good!
﻿
Posted by AmyDublinia at 16:47 No comments:

Life in the tropics! Aka the menagerie 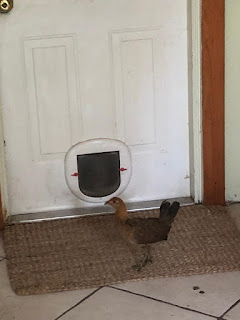 And this was today! Yes, that is a photo of a chicken, taken INSIDE the house.

And I am not even going to mention the baby Cuban lizard and palmetto bug visitors we had yesterday also.

Life is fun!
Posted by AmyDublinia at 17:52 No comments: 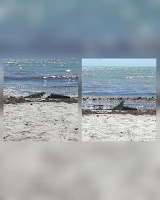 An iguana on the beach yesterday.

In all my time in Key West I have never seen one of these creatures on the sand!

Seems not many other people have either... 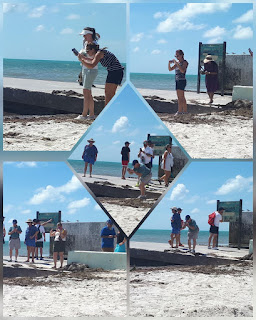 ...s/he quickly gathered a fan base!

Posted by AmyDublinia at 07:18 No comments:

Where to begin to describe the beautiful sunset sail I was on yesterday? There is nothing like being out on the water on a boat, and the SV Argo Navis takes that to the next level. A stunningly beautiful boat with plenty of room to move around and enjoy lots of different areas/views. Wonderful friendly staff who work so hard to ensure you enjoy everything - mindfully serving the snacks (describing them in sumptious detail), wine, beer,  all while manning the boat's beautiful big sails. And how about those sails! When the boat is running on sails alone it is a magical experience.

The food is delicious - local breads, delicious cheese and charcuterie. And very well chosen wine and beer to perfectly accompany and enhance.

Posted by AmyDublinia at 06:17 No comments: 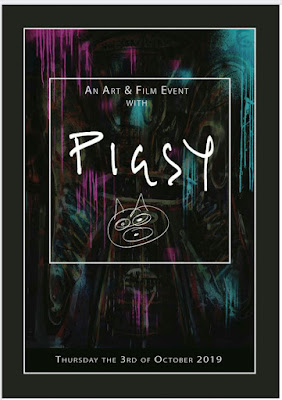 Fantastic Pigsy event coming up this Thursday - a presentation of his latest artwork and a screening of the wonderful Mike Andrews' Pigsy documentary film.

The only bad news I am afraid, is that it is an all-ticketed affair and at this point is Sold Out!

Posted by AmyDublinia at 14:48 No comments: