Enid and I went to the closing night of Dirty Dancing last week and it was a really great night. 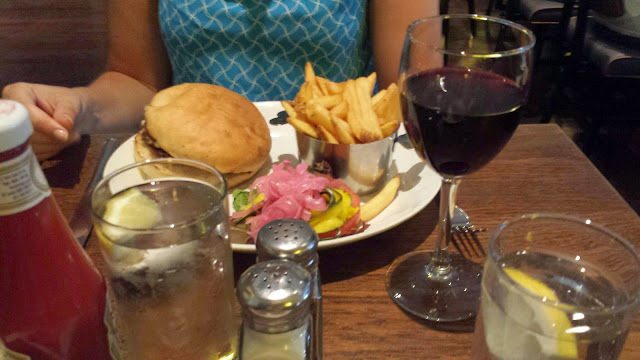 First we went to Tribeca in Ranelagh.
We love this place.
A glass of Malbec and a hamburger - I have never ordered anything different here!!!!!  Even though everything else smells so nice and looks so good I just can't resist the hamburgers.  They are the best hamburgers I have ever eaten - and that includes America.

The pros!
The DANCING!!!!  The dancing was incredible.
Johnny Castle!  The guy who played Johnny was very hawt :-)
Johnny Castle's muscles! The guy who played Johnny had awesome arm muscles
The feel - I really think they captured the conservative feel of an exclusive summer resort in the 60's.  I felt like I was THERE.
I liked the additional scenes which were different to the film - the folks singing We Shall Overcome around the campfire.
The theme of standing up and fighting for what you feel and believe, I think came through even stronger than the film.
The chalet/bedroom scenes between Baby and John were very evocative

The cons!
I found the acting - especially Baby :-(  - to be a little bit screechy.  But I don't know if that is just theatre and we were right up the back so maybe they just need to overact to get the message up to us all up in the Gods.
The costumes - I loved the WINE coloured Kellerman t-shirts the men staff wore, but I don't know why the girls staff then wore RED skirts.  Note to production: this is not England/they were not redcoats, should've gone for wine in my opinion.
A lot of the jokes fell flat. Maybe shouldn't have gone down the comedic route at all??

So, I say again I had a great night but have to admit that I wouldn't be rushing to see it again.  BUT it did whet my appetite for ROCK OF AGES which I am going to see (again) at the end of September.  I cannot wait!
Posted by AmyDublinia at 09:40 No comments: 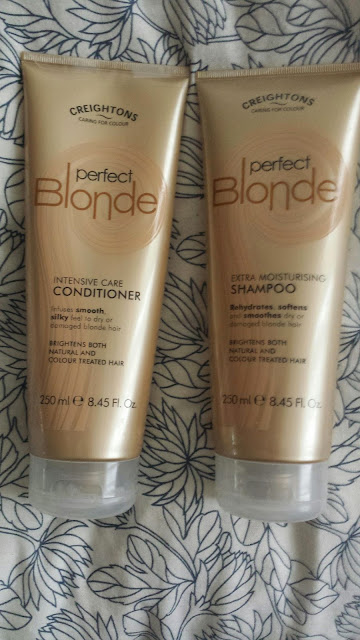 I cannot recommend this stuff enough. €3/4 for the two from Penneys and it's really good!
Leaves your hair really soft and shiny.  And brings up your colour nice too.
Go buy!
Posted by AmyDublinia at 12:19 1 comment:

I was at my friends Caitriona and Stephen's wedding yesteday.  It was a lovely relaxed day and evening - a very cool wedding held in the beautiful settings of Horetown House..

Unfortunately my phone (i.e. my camera is still out of action) so I don't have photos of all the nice touches at this wedding that I would like to show you :-(

So this is me all dressed up for the wedding.  You can't really see it in this pic but my hair was styled very 60/70's a la Sharon Stone in Casino. 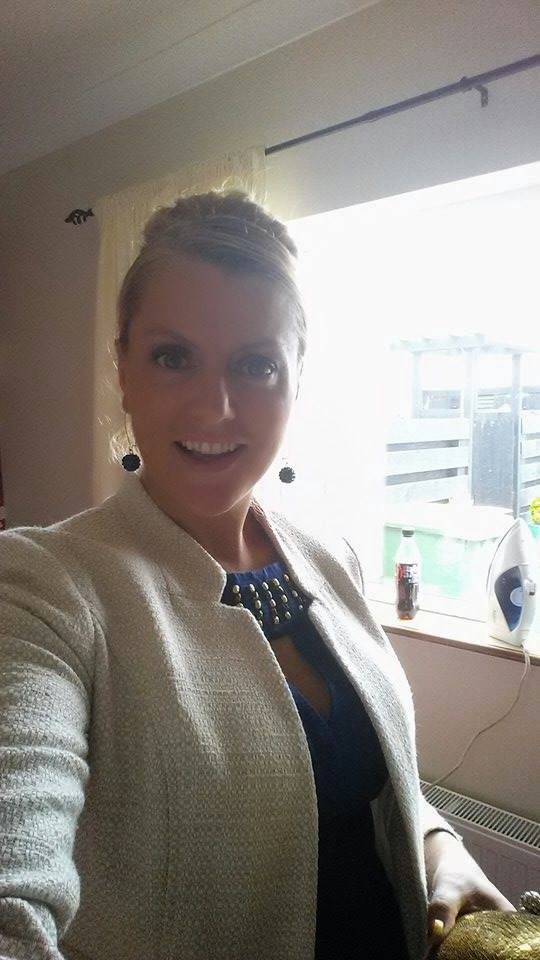 I wore my gold shoes and purse which I dragged out from the back of the wardrobe.  This was the first time in 6/7 years that I've worn the shoes.  They were actually very comfortable! 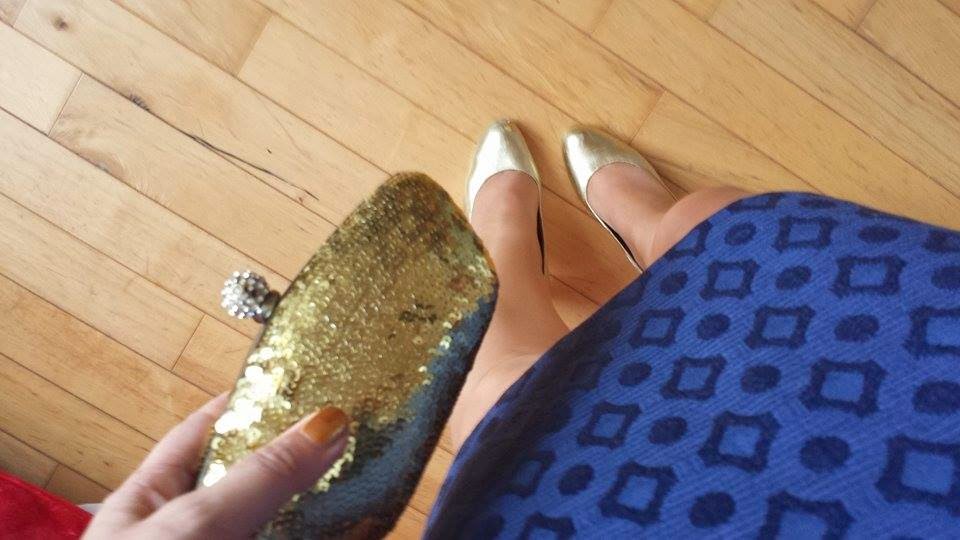 So here's some of those little touches I mentioned!
The dressing on the tables was so nice and rustic and very herb inspired! 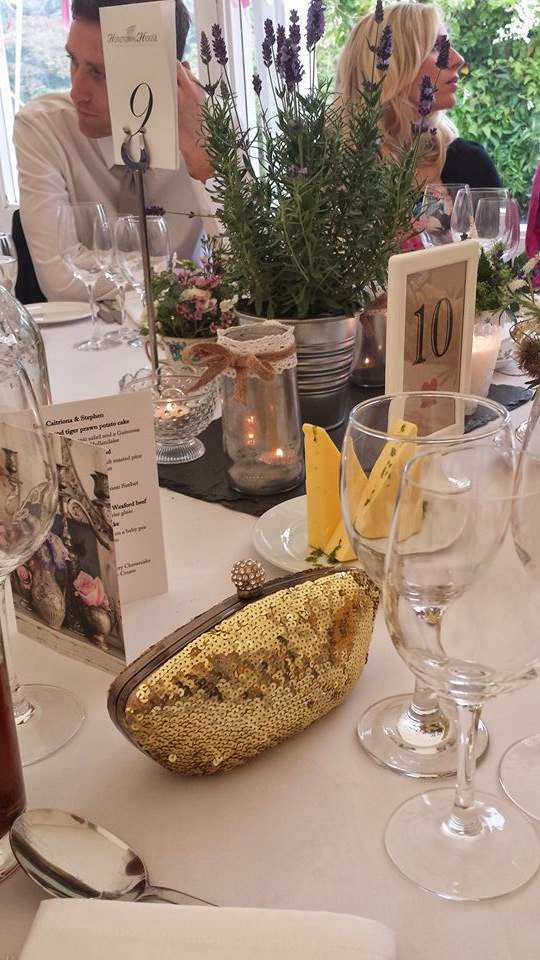 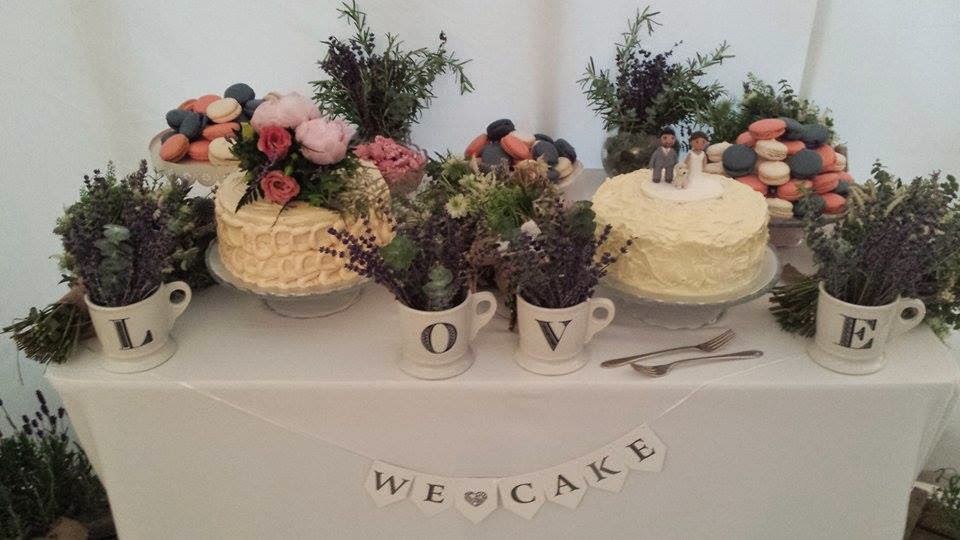 Fun with dressing up!
In one of the drawing rooms Caitriona had set up a chest of dressing up props.  Plus there was a polaroid camera (with tons and tons of boxes of polaroid film!) and a wedding album.
We all had fun taking photos and gluing them into an album and writing a message.

It was a really great day.  Horetown House is a very nice big old country estate house.  The drinks reception (champers and divine hors d'oeuvres) was held in two big adjoining drawing/sitting rooms.  We then moved into a great big marquee (rustic white sheeting and lovely whitewashed wooden floor) for the meal and dancing.  And then at about 2am a lot of the wedding party headed down into the cellar to the bar for some music and singing - both families are verrrrrry musical.

Thank you to Caitriona and Stephen for a beautiful day.

Ps.  It is really unfortunate I have no more photos, I have a feeling you would all LOVE to see the bride, her dress was like something out of Downton Abbey, and the bridesmaids, oh my gosh, divine 1950's dusky pink brocade dresses.


Posted by AmyDublinia at 11:30 No comments:

I did something really really stupid and left my iPad on the train on Monday morning.

How the hell did I do that?!!!!  Well let me explain.
In Dublin we have this free newspaper (the Metro) which I was reading on the train.  I had my iPad on the table also and when I finished the newspaper I put it on top of the iPad.  I then dozed off for a few minutes...I sometimes do this on the train :-) And while I was starting to doze off, I actually remember thinking, now that is a really silly place for your iPad, you're going to forget it because you can't see it.  And what did I do? Exactly that!

So when I realised I had left it *umm which was only about 4 hours later (embarrassed face)*, I got straight onto Iarnrod Eireann (Irish Rail) and talked to some very helpful people who set about trying to help me. It had not been handed in to Lost Property at this point...which was not good news.

By 6pm that evening I really had given up hope.  But (co-incidentally enough) while I was on the train home Irish Rail rang me to say that it had been handed in.  They sounded very surprised - but happy for me.

So the next morning I collected it in the main Dublin station on my way into work.  The phone number of the guy who had handed it in was there as well.  I texted him to tell him how grateful I was.  Plus I asked for his address as I wanted to send him something small.  He replied saying my text was enough as he is just glad it is back with the owner, plus he hoped somebody would do the same for him some day.  I am sure Karma will be good to him in the future...

I really was so lucky to get it back.

I like to think that my "One Human Family" sticker on the iPad cover had something to do with it coming back to me! :-)

I have not blogged for a while for a combination of reasons.

Firstly I was on holidays in Key West, Florida so I always I would do less blogging than usual over the last two weeks.  However I could not connect my laptop to the wifi so unfortunately there was literally no blogging whatsoever.

Secondly, the night before I was flying out my phone, which I use for taking photos and immediate uploading died a death*.
So I took a lot of photographs with dad's camera, and I now have them loaded on the laptop, but now I need to arrange uploading them and doing blog posts about my trip.

This weekend I will hopefully get a few posts up about wonderful Key West.

*"Died a death" - a unique Irish way of saying something methinks :-)
Posted by AmyDublinia at 13:15 No comments: