On the Basis of Sex

I'm a big fan of Felicity Jones. I first saw her in a pretty rubbishy little film around 2011 that I only watched for the snowboarding.  Chalet girl - pretty rubbishy as I said, but she shone in it.

And then of course she went on to feature/star in the Star Wars films to rave reviews, and I admit I always felt a little possessive of her in a "I knew her when" kind of way.  Anyway, I'm rambling. She is wonderful in this film.  Her facial expressions in particular, are sheer brilliance, and capture that indomitable spirit, look, strength and determination of the wonderful Ruth Bader Ginsburg

The film covers the life, with a focus on the career and marriage, of  RBG from 1959 to 1970.  1959 was her first year in Harvard law school and the movie culminates in 1970 when she takes on a groundbreaking discrimination case.  No spoilers: I won't ruin the film for you, it's definitely worth seeing, but I will say that I had not realized what her life was like during the period leading up to the 1970 case - especially considering her stellar career since then.

It's a film that arouses reaction. Some of it is extremely funny.  When she told the Dean of Harvard that she came to Harvard to learn law so that she could "be a better wife to her husband" (he was in 2nd year of Harvard law at the time), it was a major guffaw moment.  And then at times (a lot) it was bang your head on the wall with frustration - some of the reasons she got turned down for jobs were jaw dropping. But overall, it was a movie that filled me with pride.  What she did for women's liberation was inspirational...and it resonated with me bigtime considering what Ireland has gone through over the last few years.  I was brought back to the memory of all of those doorbells I rang, the conversations I had, the leaflets I gave out, the votes I asked for, during the lead up to the referendum on the 8th Amendment. I was filled with all those emotions again - happiness, pride and RELIEF - we made history and no woman will have to go through what thousands of women did every year in Ireland in the past. One of my favourite blog posts of all time captures my feelings of that time. 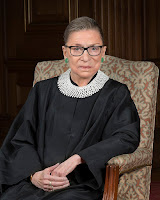 Overall I cannot criticize this film a tad.  It is a great depiction, and a wonderful chronicle, of a living legend.

Ruth Bader Ginsburg is 85 years old and still serving as an Associate Justice of the Supreme Court of the United States of America. May we have her for some years more.  In these troubling times we need her more than ever.

I hope this film will serve as inspiration for us all to keep fighting the fight.  It too is needed now more than ever.

On a separate lighter note.
Goddamn Felicity Jones rocked that 1970 ponytail, silk scarf and earrings look.  This is not FJ but this is a sample of the look ==>
Next time I am home in Ireland I plan to pick up a Peter O'Brien or Paul Costello scarf in Dunnes to try out the style myself!


Posted by AmyDublinia at 07:31 No comments:

712 Eaton Street is interesting for a couple of reasons.  Primarily I love it for the shape and design - it being a beautiful proportioned octagonal house.  It is also known for previous owners/residents; Angelo Donghia in the 70's and Calvin Klein in the 80's.

Standing since 1885, it was built for Richard Peacon, who was the owner of Key West's leading grocery store located at 800 Fleming Street and who later became a founding director of the Island city National Bank.

Pictured below are photos of the house.  The first from the Calvin Klein heydays of 1983, and the second a photo I snapped for posterity two days ago. 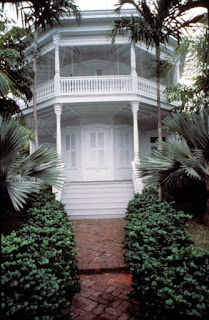 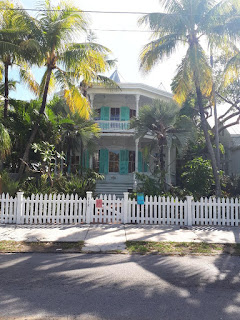 Posted by AmyDublinia at 06:38 No comments:

On the 1st of January 2019 I flew from (a snowy) Chicago to (a sunny) Miami.  It was a relatively early morning flight, which, while a bit of a pain getting up for - and in fact meant a pretty early bedtime, and cutting short of the New Year Eve's celebrations the night before - it did mean that I got to Miami in good time and allowed me some good daylight to drive down to Key West.

The car rental area in Miami airport is really good in my opinion. In a large semi circular area all of the rental companies are laid out next to each other.  It's convenient to get to as well, via shuttle from the main terminal.  Once there it was a short wait and a smooth transaction to get all my paperwork done and from there it was down two floors to the car park to pick up my car.

This is the car I rented. I always tend to go for a jeep or an SUV when I rent, particularly in the States.  I just feel better in a vehicle where I am positioned a little higher.  Actually, now that I think of it, this is only particular to when I drive in the States - when I rent a car in Europe I invariably get the cheapest little teeny thing available.

So! Off I set.  I was a small bit nervous about driving on my own, but not too bad.  While it was my first time doing this drive completely on my own, and it can be a bit tricky getting out of Miami airport, I had recently (back in May) done the drive with Mam so this gave me a bit of confidence.  Anyway, no problems at all.  I took all of the correct turns getting out of the airport and avoided going towards Miami city (which happened me once before, and ugh was a complete nightmare to get out of) and in no time at all I was on the Overseas Highway/US 1 and on my way to PARADISE! 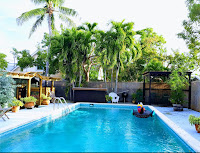 And now I am here.  And all is good! I have my bike and am nipping round the island on it.  I am eating beautiful seafood, spent the day at the beach today, and am going fishing next week.
Strike that.  All is GREAT.

Oh gosh.  My first post of 2019 and already it is the 9th of January.  Maybe one of my resolutions should be to blog in a more timely fashion!

If I can crack these two I think they will lead to lots more good stuff - better headspace and more time to do other things to name but two.

And that has just prompted me to think of a third one!
3. Live in the moment/delight in the presence 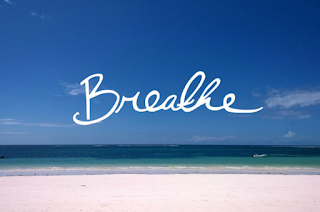 Posted by AmyDublinia at 12:26 No comments: