Last Friday evening a neighbour of ours called over to say that Harry was outside her house, injured with a badly bleeding paw.
When we brought him back to our house and examined his paw I thought initially it might be a pulled out claw, but on close inspection it turned out to be skin torn off his paw.

So we called the local vet who put us in contact with the out of hours vet in an animal hospital about 20 minutes away and we arranged with her that we would call straight out.
I wrapped Harry in a towel and he was soooooo good in the car.  Didn't move a muscle.

And then he was soooo good in the vets.  He got a little bit agitated when the vet was cleaning the paw but all the other times he just sat on the table and let her examine him.
The vet advised best to leave him in the hospital for the night and she would do a small patch up job the next morning - she said she would trim the area rather than switch it and that it would heal up nicely. 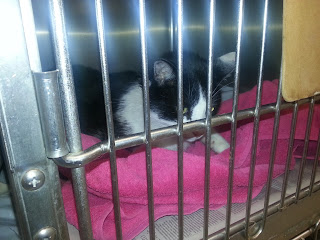 Here is Harry in a little cage for the night looking very sorry for himself.  All the other cats were caterwauling like lunatics so I think it was a bit of a shock to his system.

Next day we got a call that everything went well and to come and collect him.  We brought him home wrapped up in a towel - all the vet customers laughed when they saw him lying back like a baby wrapped in the towel.  But again he was soooo good in the car on the way home.

His little paw has a purple bandage on it and he has to wear "the cone of shame" or as the vet calls it an Elizabethan Collar (you learn something new everyday!) for the next week or so. 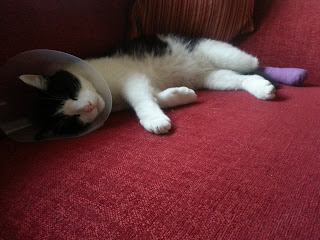 He also has to stay in for the next week.  As you can see from this photo he is even more sorry for himself than ever - he is sloping around the house and crying at the front door.

We've to bring him back for check up and removal of dressing on Saturday and hopefully we will be able to allow him back out then.