Yesterday I went to see a play with Enid and our cousin Kasey.

Talk of the Town is a play written by Emma O'Donohoe (of "Room" fame) about the life of the Irish writer Maeve Brennan.

It was a bit of a strange experience to be honest!!!  When we arrived we were told that the lead actress (playing Maeve), Catherine Walker, had an accident and was being kept in hospital for observation.  So at very late notice they had got another actress (Fiona Bell) to take over for the last two performances - rather than cancel.  "The Show Must Go On" as they said.

BUT because Fiona was taking over at such late notice she would "read" from the script (???). Now being completely fair to her she did as good a job as possible and she certainly was not just "reading" she was acting as well obviously.  But, it was extremely distracting to the overall performance.  As Enid said it was like some kind of experimental theatre...and as I said yeah and the experiment did not go so well.

But, the obvious distractions aside, it was quite enjoyable. The story of Maeve Brennan herself is very powerful.  She moved to New York and wrote for The New Yorker during the 1950's while living the life of an archetypal New Yorker.  But over the years she suffered mental health issues and ending up dying lonely and destitute (she gave away her possessions indiscriminately).  I did find the play a little slow moving at times, but I don't go to the theatre very often so maybe that was just me...

Afterwards we went to The Mint bar for a cocktail!  I had a cosmopolitan - I just fancied drinking out of a martini glass after watching all the martini drinking on stage!  Kasey had a White Russian.  And Enid had a Ciaproska. 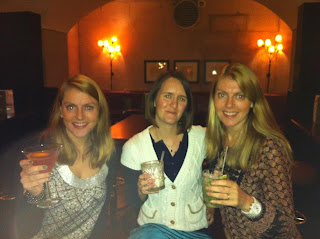