I blogged a while back about needing a new driver's licence which I am only getting around to organising now.  Not being able to drive the car is really getting to me! 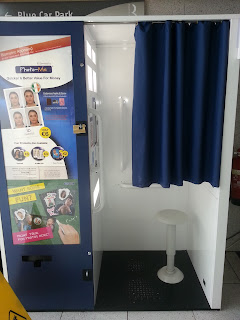 There is something cool about photo machines that really appeals to me.
Considering the evolution of cameras (film to digital etc) over the last twenty years there has not been much change in the passport photo booth. 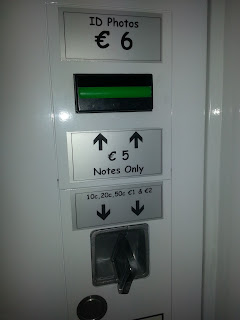 Though one change since I last used one is that they take euro notes now, instead of having to have all change! But they do not give change so you have to pay with exact amount e.g five euro note and one euro coin. 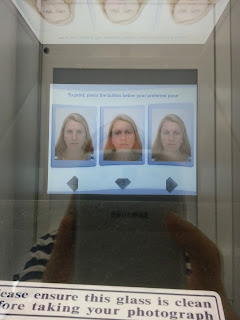 You get a chance to take three chances to take the photo and then you get to choose between the three at the end.

I thought my first photo was "fine".
I thought my second photo looked like I was drunk - look at my eyes and mouth all over to one side.
In my third photo my eyes were half closed.

So I chose the first photo. 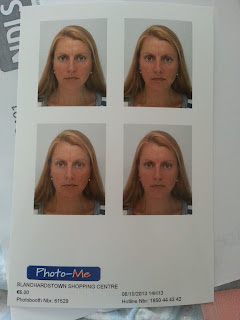 Here is the end result.  They are "fine".
I was afraid to smile - smiling is not allowed for passports and I was not sure if this applies to driver's licences also.
So there you go.
Quick and easy, and all good except for a bold child coming up (twice!!!) and sticking her head under the curtain at me. She was about four so should've known better - particularly when I told her to go away.
Seriously, who lets their kid do that???
Posted by AmyDublinia at 08:43