Back to the Dead Elvis

Amongst a million other obsessions two of my biggest loves in life are Elvis Presley, and Back to the Future films.

On Saturday night at the Vodafone Comedy Festival I had the pleasure of seeing two very unique interpretations of these two very things. 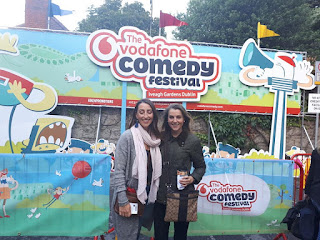 First up was a script reading of Back to The Future.  It was awesome!  I literally laughed through the whole thing.  It's hard for me to describe so forgive me!  There was a cast of 5 playing all the different characters, and there was a narrator holding the whole thing together.  Then there was a lot of rewriting of the script -  for both the era, the Irish audience and for the comedy.  Yeah I told you that it's hard for me to describe properly, trust me, it was brilliant, best you go catch it and see for yourself!

And then. THEN! The Elvis Dead.  A retelling of the cult film Evil Dead through the medium of Elvis Presley songs.  Created by Rob Kemp - a tremendous singer, performer and comedian - this was AMAZING.  Simply amazing.  To spend an hour laughing uproariously, plus singing Elvis songs, come on, does it get any better than this??  Ok this is one that will be touring and one that you must simply go to.  Did I mention it was amazing?  It was stupendously amazing!