Dillingers, then Caitlin Moran at the National Concert Hall

A couple of  week's ago our cousin Kasey emailed Enid and I to see did we want to go see Caitlin Moran speaking at the National Concert Hall.  Enid had read some of her books and I was aware of her after seeing her on the Late Late Show so we both thought it sounded interesting.  Kasey kindly said she would organise the tickets.
So the week of the talk quickly came round and after a few emails it was decided we would go to Dillinger's (yay) and then on to the NCH.
I arrived first so I had an opportunity to have a good look around Dillinger's from a different angle - Enid and I normally sit at the bar whereas we had a table this time. 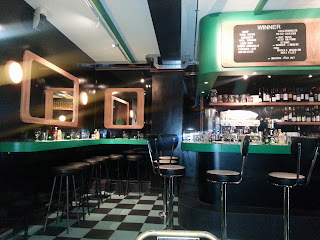 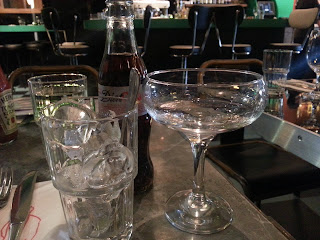 While I was waiting for the girls I ordered a vodka and diet coke for myself.  What I love about Dilly's is the nice staff - they don't bat an eyelid when Enid and I order our drinks and ask for them to be served in the cool cocktail glasses :-)  Ah the things that keep Enid and I happy!
As you can see I was also supplied with a glass of ice and a spoon which I like too. 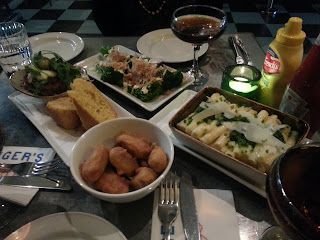 For eats we got a sample of the small plates.
I got the mac and cheese, Kasey got the chili and cornbread and Enid ordered the brocolini with garlic crema.  We all tried some of each others.
In the forefront of the picture are corndogs which I have never eaten before in my life!  These were mini frankfurters covered in cornbatter.  They were little bites of deepfried heaven!!!!
********************
We then strolled to the National Concert Hall.  We didn't know exactly how to get to it from Ranelagh but with the aid of Kasey on google maps we found it easy enough - and we walked through some nice areas with interesting houses. 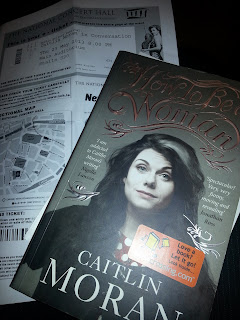 Although we weren't getting a drink we pottered into the bar to have a look at it and as we walked in 3 books stacked on a little counter caught my eye. I checked them out and what do you know (a) they were Caitlin Moran and (b) they were Bookcrossing books! This meant we could take them (yes FREE books) but it also means that after reading them and registering them on the bookcrossing site we will need to release them on! Sounds like a deal to me!
Thank you LeamhLiom - the Irish bookcrosser who had released them in the NCH.﻿ 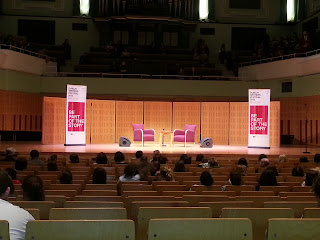 The talk was part of the Dublin Writer's Festival 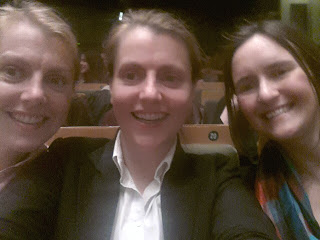 Enid, myself and Kasey. 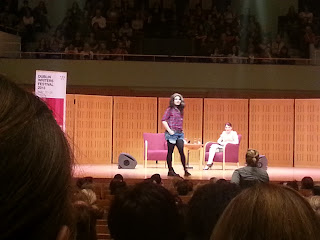 The woman of the hour!
Okay!  So my thoughts on Ms Moran and what she had to say!
She stormed on to the stage all mad hair, tights, doc bots and denim shorts and I must say for the first five minutes I detested her.  Sorry :-( I really did.  I just found her waaaaay over the top and just too in your face and just too damn talkative and just too I don't know, maybe, "contrived".
But very very quickly I found myself warming to her.  It's impossible not to.
She is intelligent, funny, articulate, cheeky, hilarious, serious, irreverant, crude, interesting, warm, self deprecating, proud, and just god-damn all round BRILLIANT.
Highlights for me:
Slagging off her appearance on the Late Late Show.
Well slagging off the Late Late Show really.  (Paraphrasing) "So there I am: a feminist, sitting with woman who has shown her breasts in Playboy [Rosanna Davidson], while watching a woman dance Swan Lake [Monical Loughman].  The producers must have gone what are we going to do with these two, yeah let's segway them with a ballerina"
Oh jesus, depressing, the above (in my words) sounds so unfunny but I swear to  God out of Caitlin Moran's mouth it was fantastic.
Another funny moment(s) came when the floor was opened to the audience to ask questions.  A mix up with mics meant that we were all expecting a question from a lady on the ground floor whereas the mic was with a lady in the stalls above.  So suddenly this disembodied voice comes out of no-where "You write briliantly about xxxx" and Caitlin jumps up and screams "what the hell, WHERE are youuuuu?" (or something to that effect).  We all shriek with laughter, she continues "are you my inner voice???", more laughter,  "because that's what my inner voice would say to me...you write brilliantly"
It was just so funny!
Equally funny was where a girl (bravely in my opinion - fair play to her) explained she was making a radio documentary and (kind of pleaded!) was there any way she could have five minutes of her time after the show.
You could see Caitlin didn't really appreciate the awkward position and she said something like I'm not sure I have the time, I'm signing afterwards, but look I'll see what I can do, talk to my people etc etc......and then just as she moved on she just threw out a little "cheeky bitch" at the girl.
:-)
Loads loads more of greatness over the course of the night.  A fantastic night.  Only twenty euro - worth every penny, I would have paid double!!!!!
Since then I have flown through my bookcrossing book "How to be a Woman" - which I shall now release so someone else can enjoy the amazing Caitlin Moran.
Three things to finish on
1. I love you Caitlin Moran.
2. While I always considered myself a feminist, I here and now confirm that I am not just a feminist, I am a STRIDENT feminist  - in joke, between me and Caitlin ;-)
3. Apparently she is on Twitter and is prolific in her tweets.  And of course amazing.
I am tempted to join Twitter just for Caitlin Moran.