On Wednesday myself and a friend attended the launch of the Gibson Hotel's new bbq range designed by Rozanne Stevens's.
The  Gibson Hotel had very kindly sent me an invitation to this event and I was excited when I received it. 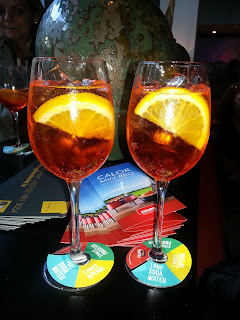 On arrival we were greeted by an Aperol & Prosecco cocktail/spritzer - 3 parts Prosecco, 2 parts tonic water, 1 part Aperol.
It was a very nice and refreshing drink, although both Deirdre and I commented that we thought it tasted much weaker in alcohol than 3 parts Prosecco.
There was a fine spread of food, all made by the Gibson kitchen made from the recipe's designed by Rozanne. 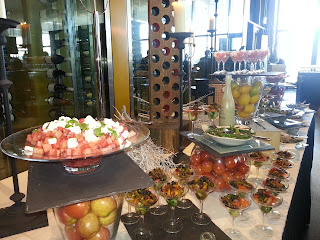 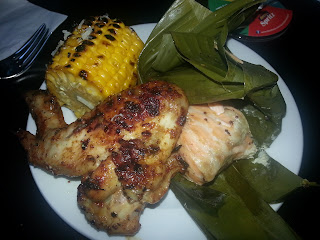 The salmon steamed in a large leaf was so succulent and flavoursome!
And the charred, cheesy, salted corn on the cob - oh momma!  ﻿


Rozanne then gave a short presentation about herself and her cooking (she apparently favours the "ish" style of cooking - thai-ish, irish-ish, bbq-ish - relaxed fusion cooking I guess!)
She was a very nice relaxed speaker and as Deirdre comment she really charmed us all.
And she was talented at what she does - both the cooking, and the talking while she cooked - she made it all look effortless.
﻿ 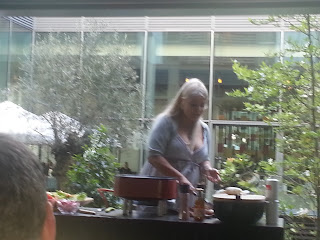 Rozanne bbq'd a lobster with herb(ish!) butter on the new Calor mini-bbq which is a dinky little thing!
Check it out - it stacks together like a little picnic basket and when you take it apart it forms a prep area and a cooking area.
It's a very clever gadget in my opinion.  But Deirdre and I did comment that it is a very small cooking area and wondered it it would be big enough for using for more than two people.  But it definitely would be great for a romantic picnic avec deux :-)
﻿ 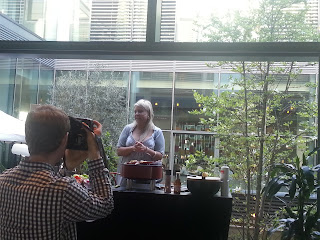 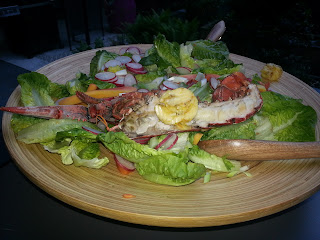 Here is the lovely lobster, butter and salad dish that Rozanne made - with her own home made dressing made with verjuice: I think Deirdre might have been the only person in the room who knew what verjuice was (juice from green grapes) - she's a foodie :-)﻿ 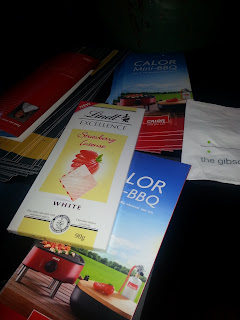 And finally Lindt chocolate!
Big thanks to the Gibson and Rozanne.  It was a very enjoyable night.
If you are planning a bbq event in Dublin I'd certainly reccomend
you investigate the The Gibson Hotel ﻿- the food was phenomenal and the hotel itself is very cool.
Posted by AmyDublinia at 09:37