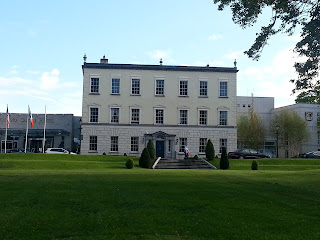 I attended a wedding in Dunboyne Castle hotel on Friday night. Beautiful grounds and establishment.  Impeccable service.
It is hard to believe that before this building was a hotel it was a convent - mainly used as a "home for unmarried mothers".  From the information on the website it has a much longer history than that, but unfortunately I fear, that for the woman who lived here while waiting for their babies to be born it will never be anything but a dark place in part of their lives...
Ireland was certainly a different world in the 50's, 60's, 70's, 80's and even 90's.


From the Dunboyne Castle website:
The orginal floorboards that carry you through the historic house have carried many of the most influential people in Irish History. The imposing house, with its three stories and seven bay windows dates from the mid-eighteenth century. The unique style of the house is a result of the influences of its many owners and now finally the Fylan Collection has put its own distinctive stamp on it.

The land surrounding Dunboyne Castle had been the seat of the Barons of Dunboyne, a branch of the famous, historical Butler Family. It first came into the Butler family through the marriage of Thomas to Synolda, daughter and heiress of William lePetit, 6th Lord of Dunboyne. It is believed that this barony dated back to 1207 with a new barony technically formed when Thomas took his seat in parliment as the 1st Lord of Dunboyne in 1324.

The original castle on the Dunboyne Estate along with the Butlers other castle in Tipperary, Kiltinan Castle was destroyed by Oliver Cromwell. He dispatched them to Connaught, with all the other Catholics who would not co-operate with him or the English Monarch at the time.
The first part of the present day castle was built at the start of the 1700's, and the building you see today was completed in 1764 by Drogheda atchitect George Darley. The house still retains many of the original features, one of which is the stucco plaster on the ceilings. This plasterwork is by the masterful Francini Brothers.

Since the Butlers the Castle has passed through many families, the Butler-O'Briens, Sadlier, Morrough-Ryans and the Watchmans. In 1955 it became home to the Good Shepard Sisters who remained until 1991 when it was bought by the Keating Family. by 1999 when it was bought by the present owners the Castle was in need of much repair. As you can see it has finally returned to its former glory and is now getting the attention and recognition it deserves from the caring and appreciative guests and staff that walk its floorboards every day.
Posted by AmyDublinia at 08:54