The Great Gatsby at the Gate Theatre 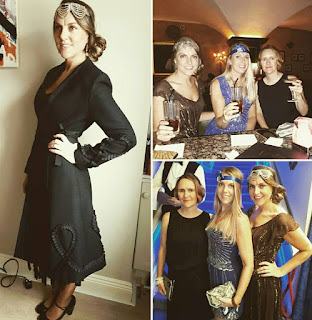 I had been very excited and looking forward to Saturday night for some time now.  A while back Enid, Kasey and I booked tickets to see "Gatsby" in the Gate.  It was quite funny, for a while there it seemed that everyone in Dublin was talking about it - they'd gone to see it, were going to see it, or were mad that tickets had sold out and they couldn't see it.
So I am just delighted to have seen it!  "Seen" probably being the wrong word - taken part in. is better.  It was an immersive theatre production - the first time I had ever attended something like this, and it was sheer brilliance.  As you can see we dressed in the style of 1922 and we arrived to the theatre where the seats had been removed from the main auditorium and it had been turned into the mansion of Jay Gatsby.  This sounds crazy but it just worked - throughout the evening while the main act was going on in the main auditorium small sections of the audience were being brought (or rushed or ran!) off to other areas and rooms of the theatre where smaller pieces took place.  We took part in Charleston dance class, a blackjack game and Enid was inducted to play a part as a reporter at one point!  It was truly a great experience.
The cast were wonderful, The sets were great.  And special mention to the costume design by the wonderful Peter O'Brien. In homage Iwore my beloved Peter O'Brien coat from his first pret a porter collection for a-wear back in 2006!