It is to my shame that I tell you that not once since I moved to Merrion Square have I visited my neighbour the National Gallery of Ireland.  Not once.  How dreadful is that. 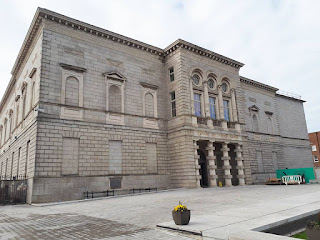 Today I righted that wrong!
I went in the entrance on Merrion Square West rather than the new millennium wing on Clare Street - I did however walk through the whole gallery and exit on the Clare Street side 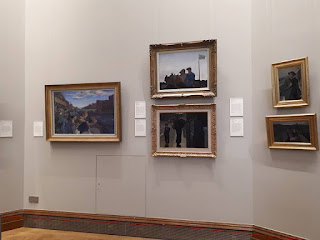 Well to say I was impressed is an understatement!
The art pieces in our national collections were simply breath taking,  I am not exaggerating when I say that seeing Jack B Yeats' Liffey Swim in the flesh gave me goosebumps.
Specifically I wanted to see two paintings by the artist Charles Lamb who during the 1920s and 30s was based in Connemara, in fact right in the area where I have stayed recently.

I bought two postcard prints. Liffey Swim because I just adore it. It's a beautiful painting. It exsquisitely captures the excitement of the Liffey Swim which I have attended numerous times, but of course many decades since this painting (1923).  I also adore from a sociological perspective that the Liffey Swim has been going that long!
The one on the right is a Charles Lamb "Loch on Mhuillin" which would you believe is the exact lake I have visited.  I thought this painting was spectacular today!
I won't be leaving it too long before I go back to visit with my neighbour again I tell you!
Which reminds me, before leaving I filled out a comment card giving my feedback that I thought the gallery equalled any galleries I have visited in Europe, Boston and New York.  And when I filled my name and address in the appropriate section I added a big smiley face and the word: Neighbours!
:-)