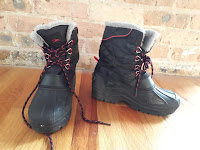 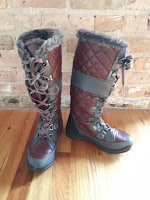 Last year, I had a pair of boots from Lidl which were absolutely brilliant and got me through the whole Winter - which if you remember included a trip to Chicago (minus 22c!!) and the Beast from the East hitting Ireland.  They were however totally dead after those tough conditions and I needed to get a new pair before my move to Chicago this week.

Unfortunately Lidl hadn't got their ski/winter/boots in stock, but Aldi had.  Figuring how good the Lidl ones were I assumed the Aldi ones would be the same.  Big mistake!  Awful.  Awful.  Tough and hard - like moulded plastic.  Little to nil (or at least not comfortable) inner soil lining.  And simply a bad fit.  Very uncomfortable to walk in because it felt like my feet were slipping in and out of them.

They were a BAD BUY.  I regret not doing a good lap of the shop when I bought them as all of the above would have been exposed pretty quickly.  Instead I just quickly tried them on and without much thought I paid for them.  (I guess, again, I was relying on them being the same as the year previous' ones from Lidl).

So what to do! Here I was in Chicago with a crappy pair of boots that aside from feeling terribly uncomfortable I really felt were just not up to the job. I dreaded being outside too long in them, I am sure they would not have kept the cold out.  Luckily I spotted an Aldo shoe shop near me. And they had the cutest pair of boots which were most importantly GOOD - insulated and comfortable.  And best of all the Aldo was a sale shop.  So boots that should have been $200 cost me only $40.  I couldn't believe my luck.

Ps. How super cute are the Aldo boots!