A culinary tour from London to Dublin to Chicago

It's been over a month since I last blogged!  How the heck did that happen?!  Well, considering this post, I guess the answer is that I have been busy - eating!

Below is a flavour (d'ya geddit!) of my last month

Enid and I travelled with Irish artist Pigsy for the screening of the Mike Andrew's documentary film about Pigsy which was featured in the Irish London film festival.  Pretty exciting, and some achievement to make it to London it has to be said!  Plus very well received which was fantastic! 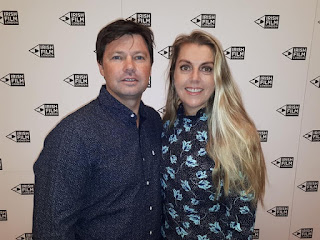 While we were there (just for two days, one night) we did our fair share of eating.  You need to know that I have a love/hate relationship with London when it comes to eateries.
So.Many.Chains.
Very nice chains I will say!   Restaurants, that you would not think are chains. Great food places.  Nice décor places.  Good atmosphere places.
But chains!  All chains!

We were fresh off the plane with big wide-eyed Oirish heads on us and we were hungry.  Enid knew of a chain (sigh) called Bill's which she said was good and would be just what we needed so we headed off to the Bill's in Soho.
The food was "fine"  The drink was better - I had a Malbec, Enid had a Prosecco (hey, we were on a mini holiday lol!) and Pigsy had tea, the wild thing.

We came across Cote near the film festival cinema - which was on Regent Street.  We were on a high after the great showing at the festival, and this cute little French restaurant was the perfect place to toast the success of the film we thought.  I took a bet with Enid that although it looked small, cute and authentic, it was a chain.  She lost the bet - these chains are sneaky I tells ya!
Anyway.  The chain thing aside, this was a good place.  The food was very nice - I had pork belly and Enid had beef bourginon.  The wine was good and the atmosphere nice too.  All in all a nice place for a fine evening.

So on our last day we decided to go all out.  Enid and I normally go for what we call our "boozy lunch" a few days before Christmas, but because I will not be around this Christmas we said we would do it in London.  Throw in my graduation, Pigsy and all his recent triumphs, plus that this would be likely the last time the Three Amigo's were travelling together we said we would push the boat out and go somewhere decent, and a little bit exciting.

So the very famous Ivy it was.  Which IS officially a chain btw.  But it has been around since 1917.  And the food was incredible and the service immaculate.  So I guess I can overlook my aversion to chains on this occasion. 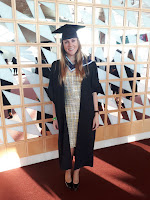 My little trip to London, and my little rant above about chains, makes me appreciate how great Dublin is and how many nice little independent places we have.  And that is something I took advantage of over the last few weeks, while out and about with friends and family saying goodbye before I departed on my little year long adventure!

I met up with my two best friend's, Enid and Alice, Sunday fortnight ago and we simply had the best night ever.  A ton of food for a really good price - the Dillinger's happy hour offer is very very good.  A lovely malbec with the food AND two Brandy Alexander's after dinner!!!  Today was the day that Brandy Alexander came into my life and it deserves to be marked.  If you have never had one of these cocktails I recommend you try one this weekend.  You will thank me for it.

Dillinger's.  It's plain and simple, consistently great.  You can always rely on it.  The food, the staff, the service, all lovely. 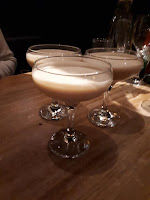 Hmmm.  Where to start? Well actually, first things' first.  I had a great night with Enid and Cousin Kasey! I always do with those pair.  And I really appreciate them coming out during my last week on a work night.
Everything was very nice as would be expected of the Shelbourne.  I had Guinness bread (mmm!) and tomato soup, a glass of malbec and a Brandy Alexander (it gets capitalisation because....emm...because it just deserves it ok!).  The gals had pretty much the same,  Oh and we got a plate of truffle fries for the table which was delish.  It was just a tad expensive I thought - particularly when compared to Dillingers.  For the same amount of money I had had a starter, main and three alcohol drinks in Dillingers.

But you know what.  It's The Shelbourne.  And I love it. A Dublin classic, always atmospheric and particularly so at Christmas.  Oh and always the chance of seeing someone famous lol.  Case in point, when Enid and I met Cuba Gooding Jnr!!

An ambient little Irish/French restaurant on Baggot Street.  I had the game terrine which was as punchy with flavour as game terrine should be.  And then for my main I had a melt in your mouth featherblade of steak.  Looking for a cosy little spot with great food and wine?  Hugo's is that place.  Lovely atmospheric Christmas decorations too!

Everything was great about the Rustic Stone, except what I ordered.  Steak on a stone.  Cook your own food eh?!  I just don't get it!  I won't be doing that again.
That aside; great starters (baba ganoush, my gosh the flavour) great company, great wine.  Bit of a dodge dessert - chocolate "soup" (a really weird, yocky chocolatey, thin watery excuse of a sauce) poured over a chocolate mousse with two florettes of cream - which were either sour cream or were gone off.
Hmmm.  Contrary to how negative the above sounds, I did actually like this.

Two mojitos for €12.  What's not to like?  Check it out on a Friday night.  A cute little Cuban inspired hipster coffee bar and pub on Middle Abbey Street. However, it's not fancy - be warned!

Since arriving here in Chicago, aside from having a lovely time I also have been doing a lot of eating.  See below.  BUT! I also am being very good and trying to eat keto/no sugar.  Any carbohydrate (rice, pasta, noodles) you see in these photos, I did not eat.  I repeat, did not eat!  Anyway, all the rest of the dishes were so good, I simply don't need those evil carbs! 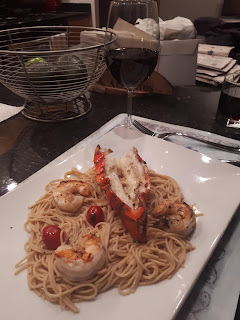 Shrimp and Lobster tail cooked on the barbeque! 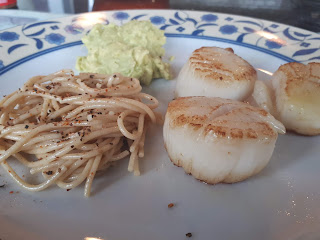 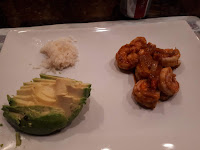 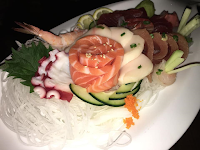 Sashimi platter!
Yes!  So very good!
We are going back in two weeks with friends for a big night out and I am looking forward to it already!