I am just back from a great break in the wonderful city of Atlanta.  I was talking with my friend who noted  "it was a long way to go for a long weekend".  But as I was telling her, I did so much that it felt so so much longer than just 4.5 days. And it is just a 6/7 hour direct flight from Dublin - so very similar to a long weekend in Boston or NYC which a lot of Irish people do. Actually if you are thinking of a short trip to the States at some point I definitely recommend you consider Atlanta.

A special thank you must go to  Bert for all the planning of all to do, and the logistics of getting it all done. Thank you Bert!

Oh! Before you start reading...a little note re photographs. There are not many photos in this first post about Day 1.  I kind of forgot to take them :-( But fear not, I took more on the next days so there will be more photos in the posts for Day 2, 3 etc.  So stick with me - it will get better I promise!

I got the bus to Dublin airport early Wednesday morning for my 11am flight. 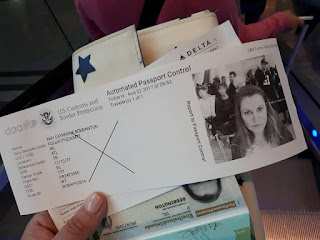 The airport was busier than expected - in particular the second security screening just before US Immigration due to a terror threat in Australia the week previous. Actually I ended up being pulled from the regular queue and moved to a fast lane because my flight was boarding soon.  I was quick through Immigration (quicker than ever before in fact, very little questions) and straight on to the plane.

I landed in Atlanta and met with Bert and it was ON!

Our first stop was in Hapeville, GA which was very close to the airport, where we visited the Dwarf House.  This is the Home of the Chick Fil A sandwich and site of the first ever filet of chicken sandwich.  The food (chicken filet!) was fab and the people working there were so nice.  When they heard I had just arrived from Ireland I was presented with a t-shirt, stuffed toy, reproduction 1950's menu and a hat.  How amazing is that!!! 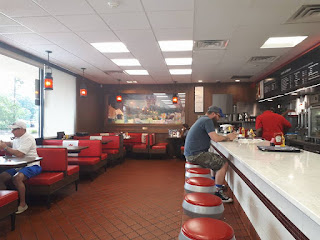 It was a quaint old style diner.  I love these stools along the counter.

We then went to Atlanta!  A quick stop off at Bert's condo to drop off my stuff and we were out pounding the pavement.

We visited the following areas/saw the following:
We also visited Little 5 Points where we had a drink in a bar called the Euclid Avenue Yacht Club. 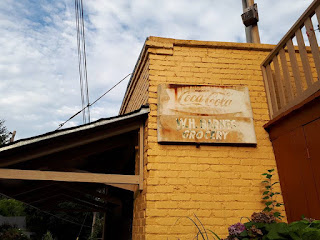 I love this old faded Coca-Cola sign! Atlanta is the home of coke after all.


If that wasn't enough we also visited/saw/did the following: 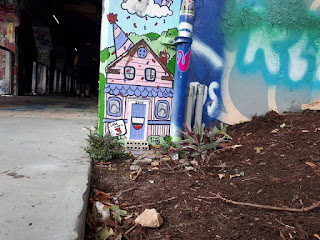 Again more nice friendly people! We passed a house with an old man sitting out on his porch who spoke with us - Bert remembered him from speaking with him on a previous stroll through Cabbagetown.  When he heard I was from Ireland he told a funny story about The Quiet Man film...

For dinner that evening we went to Superica where we had divine Tex Mex!  I got some fab pork belly/carnitas tacos they were called I think?? I shall have to factcheck that ;-)  I really wish I took photos of the food, it was so nice.  And a cool hip restaurant with nice décor too!

We then headed Downtown to see the John Portman Buildings.  This was a real highlight for me.  Although saying that, there were a lot of highlights on this trip! We first went into the Westin at Peachtree Plaza.  This was formally  the tallest hotel in Western Hemisphere and is still the tallest hotel in Southeastern USA. Then through the connecting skywalk to the  Hyatt Regency (which ws the first open atrium hotel in North America), and through a further connecting skywalk to the amazing Marriott Marquis where the incredible atrium is based on a whale’s rib cage.  It has to be seen to be believed! Incredibly impressive! 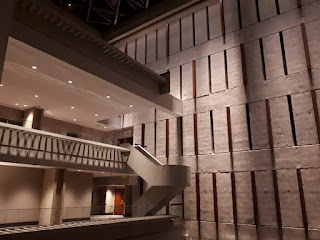 The Westin - the film The Hunger Games was filmed here 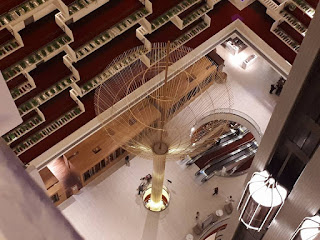 The Hyatt - what an atrium! 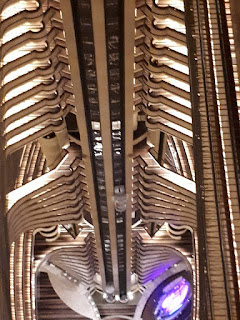 This is a hotel! These are balconies!
What an amazing building.  I feel incredibly lucky to have seen this in person
﻿
We finished the night with a  drink in Trader Vic’s which is a tiki bar / Polynesian restaurant in the Hilton Hotel.  That was fun!
Sleeps!
Unfortunately I had an awful unsettled night of sleep :-( A combination of jetlag and being overtired possibly, I think,,, But look not to worry! It was on to Day TWO!