Ok so are you ready for Day 4?  You may have thought the previous days were busy and jam-packed, but let me tell you, you ain't seen nothing yet..!

This morning I got to meet with some of Bert's neighbours. Shannon and Amanda had the most lovely (and infectious) energy and enthusiasm  and it was really nice to go for breakfast with them. 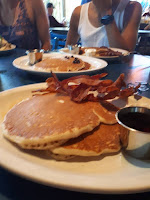 We breakfasted in Grant Park in the cutest little café called Ria’s Bluebird Café, and pancakes featured heavily! I got pancakes, Shannon got pancakes and we got a portion of pancakes (with chocolate chips...nice!) for the table.  I was excited about going to Ria's because that is one of the first places Bert mentioned once it was confirmed I was visiting.  I had been following them on their instagram and it was everything I imagined it would be. Mmmm those pancakes!

Bert and I then headed in the car to Downtown where we stopped off at at some fantastic buildings.
The GA State Capitol Building  is the primary office building of Georgia's government housing the offices of the Governor, Lieutenant Governor and Secretary of State. It has the most marvellous golden dome which I had seen from a distance many times while touring the city.  It was great to see it up close. 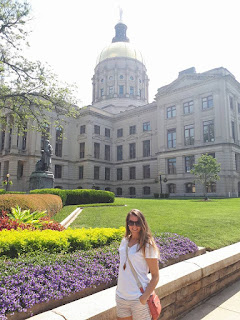 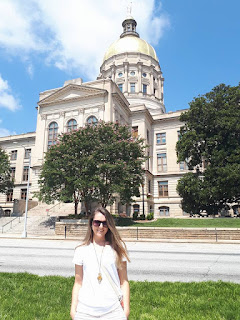 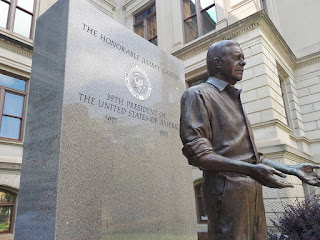 Circled around the building are many statues of notable Americans and Georgians.  Jimmy Carter is a favourite President of mine so I really liked seeing this.  I will say that we had a discussion about Carter as President, and Carter post Presidency, and some of what Bert said certainly did give me food for thought... He is still one of my favourites though. 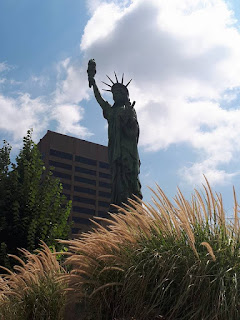 This is a replica Statute of Liberty built by the Boy Scouts of America for the organization's fortieth anniversary celebration in 1950.  Approximately 200 BSA Statue of Liberty replicas were installed across the United States and this one is located across the road from the State Capitol. 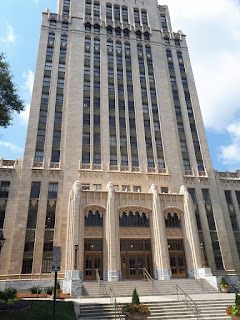 We also passed the Atlanta City Hall which is the headquarters of the City of Atlanta government. It is neo-gothic in style and was constructed in 1930. And quite impressive as you can see from this pic!

Ok next up something which was major exciting for me!!  I enjoyed this so much!
We parked in the CNN building carpark.  I thought we were then walking over to the Center for Civil and Human Rights but instead we went into the CNN building where Bert signed me in as a guest and gave a me a tour of the building.  Seriously!! How mega great is that! 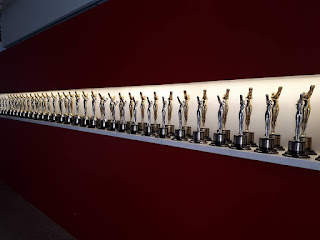 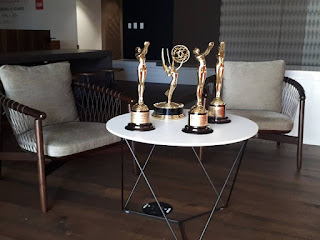 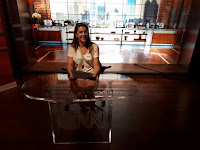 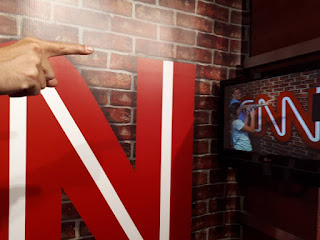 
Where the news is made!  A replica news room :-)
We also saw the actual newsroom where all the news is coming in from around the world and being checked by the CNN fact checkers and being reported out.  It was a large area filled with a huge amount of pc screens and tv screens - and was a hive of activity, even for a Saturday. Unfortunately I don't have a photo - which is only right, the people were busy at their work after all. 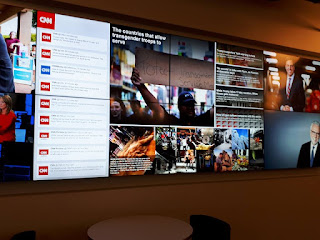 ﻿
It was cool seeing some of the stuff that Bert had worked on around the building.

From the CNN building we strolled across to Centennial Olympic Park heading to the Center for Civil and Human Rights. 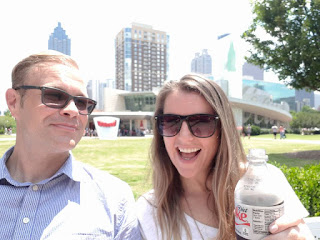 A quick stop off at "the vending machine with the coldest drinks ever" (again).  Bert got cherry coke, I had a diet coke.

The Center for Civil and Human Rights is phenomenal.  I thoroughly recommend this museum.  I learned so much more than I previously knew about the fight for human rights - about Martin Luther King and all else involved in the struggle, about the Freedom Riders (what an incredible feat carried out by student activists in 1961) and the Woolworths diner counter protest.
The museum is laid out extremely well and beyond interesting,,,and of course incredibly moving.  We ended up staying there for a long time - maybe 3 hours, maybe longer. 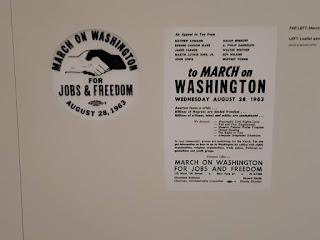 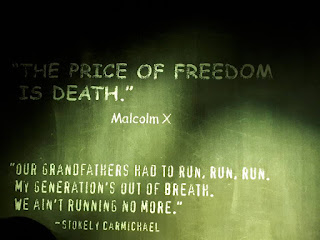 There were a lot of very moving pieces/stories but one piece stands out.  I will try describe it as best I can.  It was an exibit designed to simulate the Woolworths sit in protest where 4 students sat at a "whites only" counter and asked to be served.  You sat at a counter. placed your hands on the counter, earphones on your head, and it was suggested you closed your eyes (which I did).
Immediately you faced an assault on your senses and nerves: You felt, and heard the vibrations of a BANG on the counter.  You heard shouting in your ears "gittt up...gittt UP... I saaaidd ..GITT UPPP" and you could hear the deep breathing and the aggression of the person shouting and it felt like they were circling around you as they shouted more and more obscenities and names at you.

I don't think it can be accurately conveyed by words but let me tell you that I was quite shook after taking part in it.  Really makes you think...  And all in such recent history as well.  I am glad we live in a (somewhat) better world now.  There are other things to be struggled and fought against now, but I truly believe #WeShallOvercome
(well I HOPE anyway).

Oh one last thing about the museum, from my personal perspective it was quite amazing that I had seen some of the actual places (Day 1 and 2 of this blog) and then was reading about them in the centre.  Made it all so much more real.
Oh and there were also some cool art installations - large videos of civil rights events from all over the world set to music with flashing images of struggles and  protests which was very thought provoking.
Again I'd definitely recommend a visit to this museum.

The day continued (can you believe how much we have done so far and it is not over yet!) and we got the Marta train to Midtown. 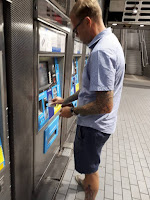 Here is Bert buying tickets for Marta.  I liked the train a lot.  It was very like the tube in London, the New York underground and the Paris Metro.  I do always like to see and use some public transport in a city so I was happy we got to go on the Marta train.  Lol, I won't lie I was happy to sit a little also :-) 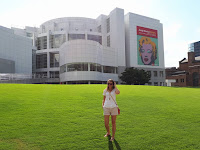 ﻿
Our first stop in Midtown was at the High Museum to see the Warhol prints exhibition.  We were going as part of a Turner day where entry to the museum is sponsored by CNN/Turner - which happens once a month and is pretty cool I think.  Bearing in mind the amount of time we had spent in the Centre for Human and Civil Rights we were later than we thought we would be and it was all a little confusing - the museum was closing in 5 minutes but was opening 30 minutes later for an event which Turner folk could attend. 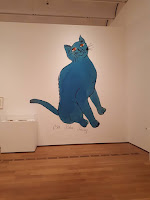 So we went in and got literally 2 minutes of Warhol and then said we'd go for a potter and return later to view in detail.
We did get to see Roy Lichensteins installations outside on the lawn in front of the museum.  One of the houses was the most amazing creations ever - appearing to move as you walked around, which made you question yourself, the piece and reality (well that was my interpretation and I am sticking to it!)

We walked through Midtown to the Margaret Mitchell marker – which shows the location where she was hit by a car and died. At only 49 too :-(

Bert then called an Uber and we went to Mary Mac’s Tea Room for dinner.  I loooooved this place.  I loved the history (all those famous people who have visited - the walls are covered with photographs), the atmosphere (it is a bustling friendly place) and of course the FOOD:
Pimento Cheese with saltine crackers, pork, cornbread dressing, fried chicken, sweet potato soufflé, squash soufflé, mashed potatoes, creamed corn, cranberry sauce, sweet tea, corn muffins, yeast rolls, cinnamon rolls and other items. 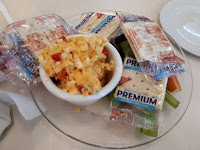 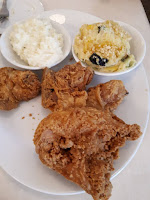 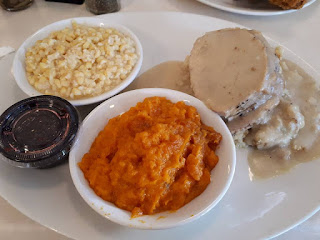 This pork and cornbread dressing was DIVINE 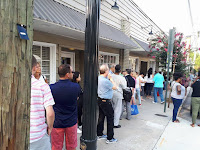 ﻿
﻿
This place is super popular!  This is the queue around the block when we were leaving!!

From there we went to the FABULOUS Fox Theater to watch a Movie that was showing as part of the Coca-Cola movie festival series.  The theatre is so Beautiful!  It was built around 1927 and is Middle Eastern/Arabian in theme with the most incredible ceiling covered in stars which looks just like the night sky.  Genuinely! I genuinely thought it was an outdoor theatre when we went up the upper tier.
Before the film started we partook in the traditional (and fun) Mighty Mo organ singalong,   I only knew the first song "You are my Sunshine" (which I love) but they also show the words on the big screen in front of you, so sure I gave it a good bash at singing the other songs too :-)

We watched a Harry Potter film - they are showing all 7 as part of the festival.  I enjoyed the film but I think it that was mainly because of the beautiful surroundings of the theatre. As for Bert, well I don't think I am revealing anything here that he wouldn't tell you himself...he enjoyed the Fox, but em, may have slept through a lot of the movie. Let's just leave it at that ;-)

Check out this Beautiful theatre here: https://en.wikipedia.org/wiki/Fox_Theatre_(Atlanta) and some of my photos below. 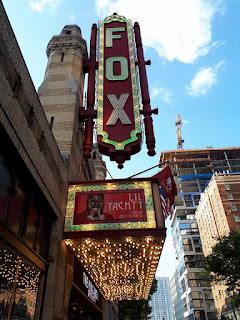 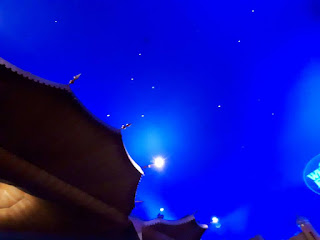 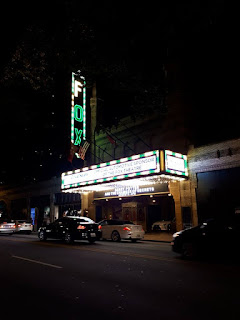 Aterwards we popped across the road and had a quick look around the Georgian Terrace Hotel.  This is where Clark Gable’s after party was held post the Gone With the Wind Atlanta premiere.   I liked seeing this piece of GWTW history.  I can only imagine the festivities that night! 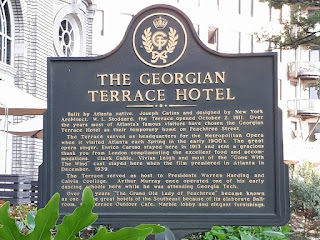 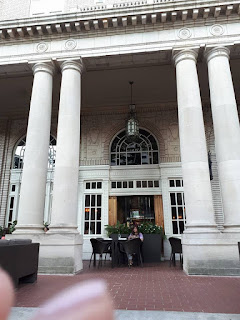 From there we then got an Uber to the CNN carpark. 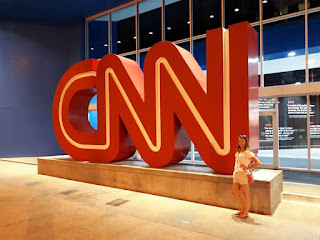 ﻿
Oh a quick photo at the CNN sign before picking up the car.  I LOVE THIS PHOTO!

Last sightsee of the day we took a quick drive through East Atlanta Village on the way home - which is a very cool neighbourhood with lots of nice bars and restaurants.

WHAT A DAY! I am tired just reading back over this, but funnily enough was not that tired on the actual day.  By the way, the observant amongst you may have noticed we never got back to the High Museum for Warhol.  Can't do it all I guess!  Can't be helped and we did see a snippet which I am glad about.

Email ThisBlogThis!Share to TwitterShare to FacebookShare to Pinterest
Labels: Atlanta, Atlanta Georgia, Georgia on my mind, things to do in Atlanta, weloveatl