You may know that I just love a good fancy dress/costume/theme party. And coming up I thought I had two to go to!  But it emerged I had my dates totally wrong for one so won't be able to go to it now.  But I will tell you about the dress I had planned anyway.

First up was my plan to go see a viewing of Dirty Dancing (30th anniversary) with my friend - and although there was no mention of costume we decided we would dress up.  So as the film is set in 1963.  And bearing in mind that Baby Frances Houseman is 16 in the film I decided it would be better for me to dress for my own age but as if I lived in 1963.  I ended up (I think) dressing like Baby's mother in the film/slightly Jackie O and result was this: 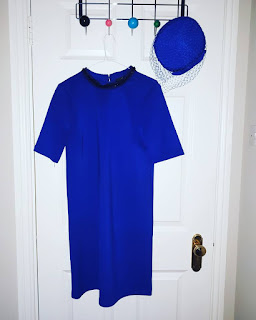 ﻿
Disappointingly this outfit will remain in the wardrobe for another 1960s night out.

Next outfit will definitely be getting out to party!  Enid, Cousin Kasey and I are going to see "Gatsby" in the Gate Theatre.  It is immersive/interactive theatre and attendees are encouraged to dress as if coming to a party in Jay Gatsby's mansion.  How fun does that sound!

Costume design is by the amazing haute couture designed Peter O'Brien.  Some day I must blog about my beautiful dress coat from his first ever pret a porter collections which I bought over ten years ago and still wear today (and still get the most amazing compliments about it when I wear it).  Do you remember the last play we went to see where he had done the costume design?  That was an unusual night is all I can say...  My blog about it is here

There is a bit of a story of how I got this dress.  I thought I had something in my wardrobe which looked 1920/1930s but when I tried it on last week I felt unhappy with it - it really wasn't the look I was going for.  So last week when I was going to meet my friend at the hopsack (see my other post) I passed a thrift store/charity shop which had 3 dresses in their window all "Gatsby" in style.  In Ireland a lot of thrift stores display their best stock in their window and have a little sign saying when they will be selling them.  Conveniently they were going on sale just the Saturday coming!  And I was happy I found the dress in a thrift store, I really did not want to pay a lot for a dress/costume I was going to wear once.

I arrived at 8.30 to wait for the opening at 9am.  I was really surprised to see two people already in the queue.  Eek and one was a girl about my age too!  Which could only mean one thing she had an eye on one of the dresses as well.  And personally the one I wanted was the nicest I thought, so I was sure she was going to go for it too.  I got in the queue and I began talking to her.  Turned out she wanted the pink dress (I wanted brown) so all was good and we had a nice laugh about that.  And interestingly she was going to Gatsby too.

Enid arrived soon after and she was a great help because she found the necklace I am going to wear as a headpiece!  So without further ado.  Here is my outfit, a bargain I think you will agree for €15 and the headpiece for €5 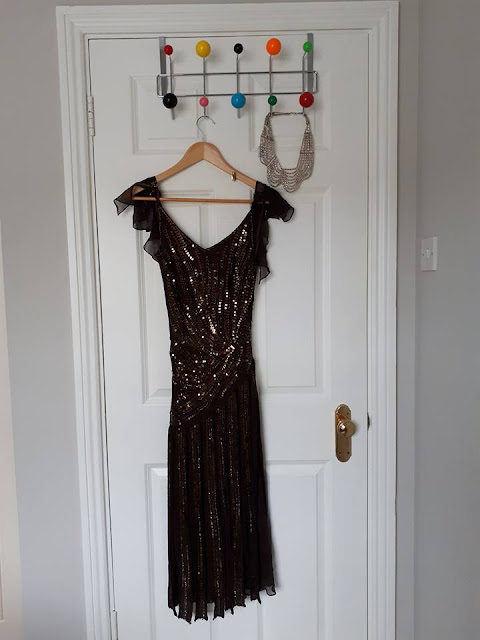 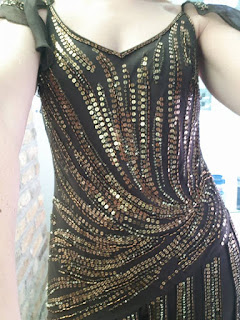 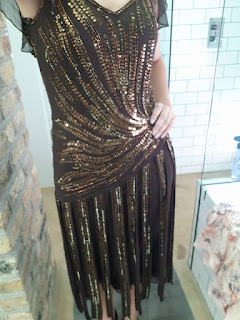